Travels as a Hillary Clinton Lookalike 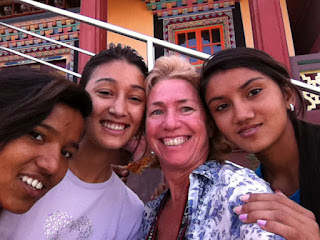 Preface for new friends/visitors: I've spent the past 25 years working in the travel industry. My earliest experience as a tour leader was when I was tasked with escorting groups of travel agents on “luxury” cruise products in Alaska and the Pacific Northwest. Escorting a Travel Agent FAM (familiarization) trip is, well, let’s just call that experience “bootcamp” for tour directors - survive it, and you’re ready for career deployment. I was writing, taking pictures, and leading tours within the travel industry for years before I set up my own travel photography business (2000). I supplemented my primary photography business with contract work as an international tour director, leading groups of mostly Americans to over 65 countries around the globe. My story begins on one such assignment. But first:

As a Tour Director, the single most important unwritten rule is this: Never participate in conversations of religion or politics with the group members. More often than not, my tours would finish with folks still questioning whether I was Democrat, Republican, Christian, Jewish, etc. So here’s a look at how this has played out under different administrations, when you’re me, and you happen to closely resemble Hillary Clinton. 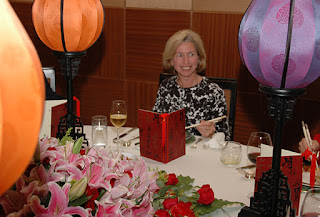 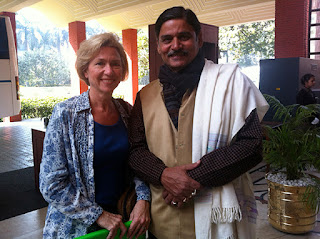 Late 1990’s: At the height of President Clinton's scandals in office, I was leading a group of Americans on a river cruise in Russia, and my local Russian guide looked exactly like (a thinner version of) Monica Lewinsky. Everywhere we went, the American guests were taking candid pictures of my guide and me together (before digital cameras, iPhones, social media) for their scrap books - sample captions: "Hillary and Monica spotted taking a girlfriend getaway cruise together on the Volga,” or “Hillary and Monica seen commiserating over vodka martinis at the Astoria.” It was all light-hearted, fun, and funny. I was addressed as First Lady for the rest of the trip. Nobody, American or Russian, Republican or Democrat, insulted me for my resemblance, and many said they would travel with me again. And many have since! But that was just the beginning. 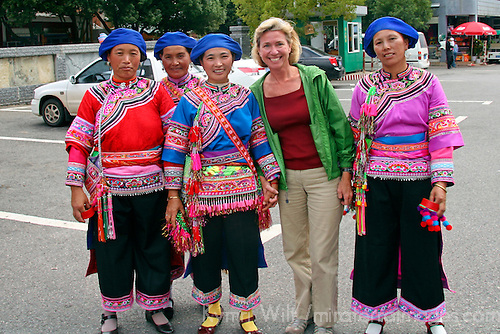 Forward to 2006 (George W. Bush is President) and I'm on assignment as a photographer traveling with an American group. We’re at the Great Wall in China. Suddenly a screaming crowd of Chinese people mobbed around me to the point that I couldn't take a step in any direction on the wall. One by one they handed their pocket cameras (some digital, but still no iphones) off to someone else in the crowd to be photographed next to me. I asked my local guide what was going on. He laughed and whispered, "they think you are Hillary Clinton touring China and that I'm your Chinese government translator - I'm not saying a word." I decided to play along. I was overwhelmed with welcoming smiles and stranger’s hands running through my hair as I put my arms around them and posed for their cameras. I handed my camera to my guide to take MY picture with some of these lovely Chinese people. It was a long morning, but incredibly gratifying to feel so much love and admiration, and to return it to complete strangers. The American travelers I was accompanying were somewhat bewildered. The Democrats loved it. The Republicans, surprised to see how the locals were behaving (which continued throughout China), were nice and enjoyed the spectacle, agreeing “maybe you do look like her, but a younger and MUCH prettier version.” Everyone was kind and civil.

That kind of paparazzi attention popped up with some regularity in my travels, professional and personal, throughout the remaining Bush years. Sometimes it got ugly.

“You bloody Americans, you’re all the same. Just like your cowboy President, nothing but a bully. America is a giant bully, pushing other nations around. Go back to play with your guns at home and leave the world be.” - white male Englishman, London, 2006.

I’m in the UK again, in a cab from Heathrow. The driver, an enthusiastic immigrant to the UK, had no end of questions for me about how I would vote and what I thought of Obama. Jet-lagged and struggling to formulate coherent statements, I turned it back on him. “What do YOU think?” I asked. He replied, “It doesn’t matter what I think. It doesn’t matter who is President of the United States. America will always be America in our eyes – the welcoming land of freedom and opportunity. The world looks up to you. Be proud.”

November, 2008. I was back in China when Barack Obama won the Presidential election. I’ll never forget the moment. My group was comprised of 4 couples – 2 couples were Republican, 2 couples were Democrats. All couples had adult children who voted for Obama. We were in the VIP lounge at an airport in Guilin glued to the Chinese news channel (no satellite tv; internet access was blocked out at the time; but we all had cellphones and texting). Our flight was delayed, thankfully, so we were able to watch the historic moment as the news broke. It looked like this:


I taped the moment, we all toasted, and then our flight was ready for boarding. We came out of that lounge to cheers and hugs from non-Americans, which followed on the flight (everyone wanted to sit next to and talk to us). Clearly, the Chinese people, and other nationalities on our flight, approved. But it wasn’t just China. My American groups and I were welcomed and congratulated with equal enthusiasm for President Obama everywhere I travelled during his two terms. 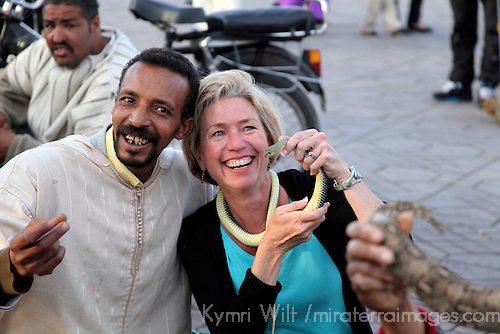 From Clinton’s, into Bush’s, and throughout Obama’s administration, my travel work took me from Asia to Africa, Europe to South America - Nepal, Egypt, Ireland, Kenya, India, Morocco, Bhutan, France, Namibia, Argentina, UAE, Sweden, Tanzania, Nicaragua, the UK, Zimbabwe, Portugal, Cuba…there’s more, but suffice it to say I encountered a wide and diverse sampling of humanity on our planet. Without exception, the people I spoke to in these other countries applauded President Obama. Indeed, these past 8 years have been my proudest to travel as an American. 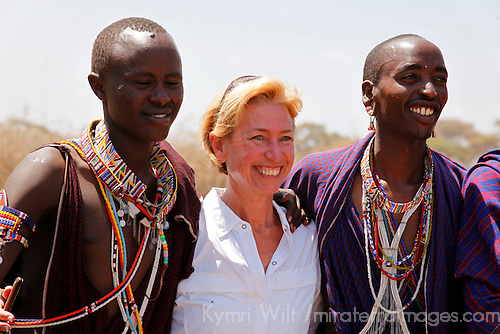 
Let’s pause on Cuba. I was greatly honored and proud to lead some of the earliest State Department licensed People to People Cultural Exchange Tours to Cuba as relations eased under President Obama. One memorable group was a true American melting pot. There were first-generation immigrant-Americans – from Hungary, Iran, and Ireland; Christians from Texas; Jews from New York; two Canadians; a venture capitalist; a film maker; a doctor; and me, their tour leader - a laid back southern California vegetarian surfer mom, who resembled the US Secretary of State. They were all seasoned travelers, but this was the first time I actually felt need to apologize for some of my fellow Americans, who arrived to Cuba with very narrow minds, biased agendas, and nasty attitudes. In March, 2013, this group and I arrived at a particularly historic moment, the announcement that Venezuela’s Hugo Chavez had died. When you finish this article, please come back and click my story about that trip here: Cuba from the Heart: Mourning and Music. 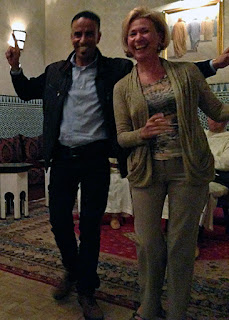 March, 2014. This one is just for kicks really. My group was another melting pot, but this time a fantastic group of Americans who made me enormously proud. I add this story not so much about my resemblance to Secretary Clinton (though it was certainly pointed out), rather, more for the striking resemblance of my local Moroccan colleague and guide to President Obama. “Maroc Obama” we fondly dubbed him. And he wore it with honor and a big smile…and together, we made a great team.

From the royal Casbahs of Morocco, to The Casbah nightclub in San Diego, October, 2016, I have been approached by strangers commenting on my resemblance, and have been asked to pose for pictures as Hillary Clinton. I always oblige with a smile.

Even those who despise her have been kind: “I hope you’re not offended, please don’t take it wrong.”

I don’t. I’m flattered. She’s a remarkable woman, and she’s a mother. Like me, she doesn’t give up.

As the attention grew this past year here in the US, I’ve continued to roll with it, happily smiling for iphones right up to Election Day, when I went full out and shared this on social media:

I’ve never had more likes and shares on Facebook, and I especially appreciated the comments from my Republican friends: they refrained from nastiness and instead, enthusiastically applauded my front handspring. Some comments began as I’d heard before, but with some new qualifiers:

“Much younger, much better looking and probably a better head of state!”

I certainly hope so. I strive to be kind, open-minded, and the very best American I can be when I travel abroad.

But here at home, in these delicate post-election days, I’ve never been more challenged. I’ve started to experience and witness hatred like I’ve never seen before, here in my country, in my state, in my city, and even in my “bubble” of paradise by the sea. But you know why I shared my video?

Because I landed on my feet. So did Hillary. And I hope, so will our country.

I pledge to keep traveling and to keep putting America’s best foot forward out into the world. Agree with me or not, this is who I am. 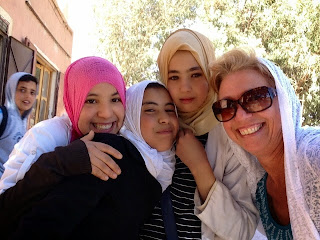