Why Vine is my Favorite Travel Photography App

"Vine is the newish social media platform that is what would happen if Instagram and YouTube had a love child." - Spud Hilton, San Francisco Gate (March 2013)

When people ask me what Vine is, I pretty much explain it the same way, only without the San Fran-centric love child reference. Vine is my all-time favorite app for travel videography, and here's why. 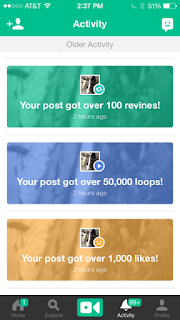 * Like YouTube, Vine has themed channels to which you post your vines, and on which you can watch vines. Popular Vine channels include: Animals, Places, Music & Dance, Sports, and Comedy.

* Unlike Instagram, and more like Twitter (who owns Vine), you are limited to a caption of 140 characters. No micro-blogging allowed or necessary. If a picture can tell a story better than a thousand words, then do you really need a long caption for video?

* Unlike YouTube, you only have 6 seconds to tell your story. Start. Count to six. Stop. Publish.

Yes. 6 seconds is all you need. That's about the attention span of the media-consuming public these days anyways. Besides, you're recording from your phone, so keeping it short and simple doesn't eat up all your mobile memory. And bonus: it's hella easier to edit a 6-second clip on the road without spending hours downloading and editing footage on a laptop.

So for those short-attention-spanners who landed on this page thanks to SEO, without further adieu, I hereby present:

* Hold the camera stationary and record a moving scene. While it's tempting to pan and zoom, the most effective method is to be still and let the subject do the moving.

* Use First-Person POV (point of view). When recording a travel experience, personalize the perspective so the viewer feels they are there experiencing and watching it too.

* See with your ears as well as your eyes. Video means audio, so pay attention to what your hearing before you film. In some cases it will be the reason you choose to take a video rather than a still. Those moments usually make for the most captivating vines.

Here's a 6-second example (note: to hear the audio, hover on the video and click the speaker button):

This particular Vine leads nicely in to my closing point.

A good vine never really expires, it just keeps growing, like these brittlestars on vine. The above video is case and point. A 10-second clip of that same musician posted to Instagram got 16 likes, while the still image of him on Instagram got 40 likes. Even the most popular travel instagrammers are lucky to get engagement from 10% of their followers, most posts average less than 1%. Compare that to the 6-second clip posted to Vine, which, as of this writing, has had over a million views (loops) 15.3 THOUSAND likes, 3,539 shares (revines), and 1,132 comments. You do the math. But clearly, Vine for the win in this case study.

For travel, start with #travelvine and #6secondpostcard. You can hashtag a particular destination, and search by a destination's hashtag for inspiration. For example, I created my own hashtag to share vines from Cuba, which has started to gain traction for those going to Cuba: #Cubavine. After all, a photo just doesn't immerse you into Cuban culture the way music does. Do those vines inspire you to visit Cuba? Good. More on that soon.

In summary, a good vine has a potential shelf life that would put a twinkie to shame. A good instagram post grows quickly, blooms, then wilts away, drowning in the river of images pouring out over the internet like a river emptying into a vast ocean.

But instagram pretty much IS that vast ocean of imagery on the internet - it's not going away - with over 300 million active monthly users, and I'm certainly one of them. Have you found me there? Here, I'll make it easy for you. Just click follow on this "#sunsetgram". I share a lot of them between travels.

It was last night's #sunset, but so nice I shot it a few times in different ways. #sunsetgram #nature #naturelovers #cardiffbythesea #encinitas #california #orangewednesday #colorsoftheweek
A photo posted by Kymri (@kymri) on Mar 17, 2015 at 10:00pm PDT

And on the subject of apps, and sunsets, I've just started playing with Instagram's new Layout app and I'm LOVING IT!

Everyone loves #sunsets on Instagram, so this is a little experiment to see how they do grouped with the new #layout app. These are all taken in #CardiffbytheSea. #sunsetgram #sunset #nature #naturelovers #IGTravelThursday

Please join me on twitter later today (or night depending on where you are):

for #TNTChats with Techlicious. I'll be co-hosting this fun photography themed tech and travel chat, and we'll be be covering tips for taking and sharing photos (or videos), favorite apps, and more. Plus, someone will win an Amazon Gift Card!

Until then, be sure to check out these other #IGTravelThursday posts: