I felt something was different as I made my way through the TSA Security checkpoint and was directed into a clean empty hallway. "To all Gates" read the sign above an elevator. Escalators were a bit further down and not so obvious, but I  stepped on and watched my surroundings change into a place I had never been before. 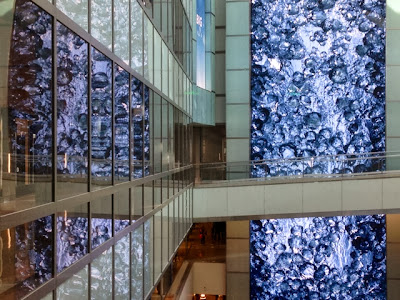 A  few employees wearing id tags and black t-shirts that said "Welcome" were coming right for me and checking doors. I was clearly unsure where to go, but only their shirts bothered to greet me. Suddenly an unmarked door opens behind me and a head pops out. The group turns. "Hey is that the break room? I need a smoke." They file right through me and into the door, it shuts, and again I'm alone at the end of a hallway. There was no way to go but to my right.

"Just keep going up to your right" I hear a voice from the Security checkpoint hollering to a couple arriving at the top of the escalator. So I kept going to my right, around an atrium filled with natural light, with a moving mural wall at the far end. Breathtaking. I stop to take it in.


This was definitely not the same terminal I'd transited so many times. I was certain I had turned the corner into an art gallery.   More people with "Welcome" shirts scurried about ignoring me. I figured if I had inadvertently stumbled upon a private gallery opening, I was going to play it cool as if I was totally meant to be there. There was still only one direction to head, and I proceeded confidently.

As the hallway poured out into a main foyer, I spied signs "Micheal Kors", "Tumi" and "Duty Free" and almost wept to realize this was, in fact, the newly renovated Tom Bradley International Terminal I'd only ever seen in construction phases from the outside. I checked my watch - I had a good 2.5 hours to explore and take it all in before my flight was to depart. How excited was I?! 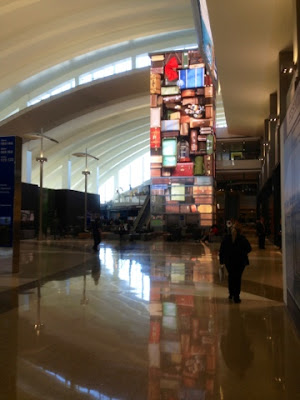 Where to start? The place was empty. I spotted another small cluster of "Welcome"-clad people at a table with signs. I read the sign behind them. 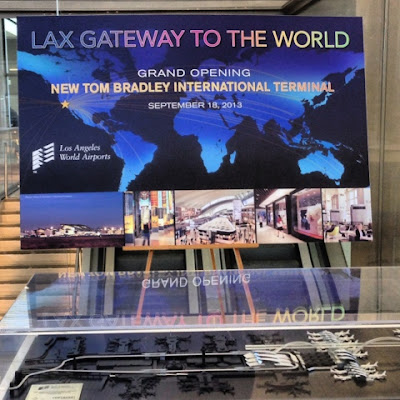 Grand opening September 18... that's today! And it's here! And now! I asked the woman who was eyeing me as I took pictures "So is this really the first day this terminal is open? Today?"
"Yes," she replied to the obvious, offering no further information. Again, her black t-shirt screamed "Welcome" as she proceeded to silently wait for me to finish so she could finish whatever nothingness she was meant to be doing there.

I looked around and spotted flight crews and yes, other travelers, gathering across the floor, so I headed over to see what the draw was. 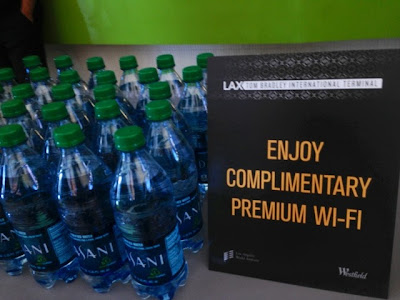 Ah, welcome freebies! Water & Wi-fi! I took a water for good measure as it seemed to be the most forthcoming "welcome" on offer, and settled on a place to sit, pull out the real camera, and continue exploring as if I were now on a press assignment. I wasn't, it was sheer coincidence that had me here for the Grand Opening of the terminal, but work habits die hard and besides, it was clean, uncrowded, and architecturally stunning.

The moving murals would evolve from cascading waterfalls to suitcases piled sky high.... 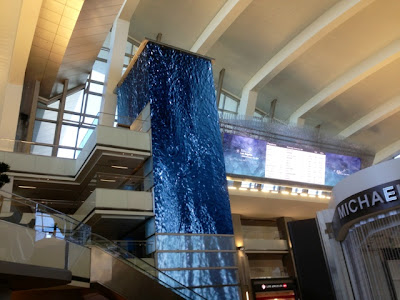 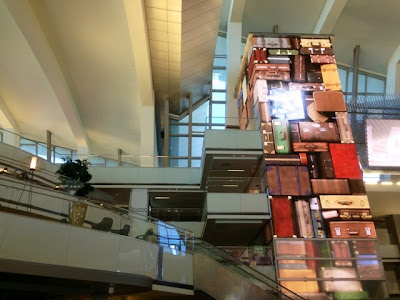 ....from cloudy skies to a Japanese painting... 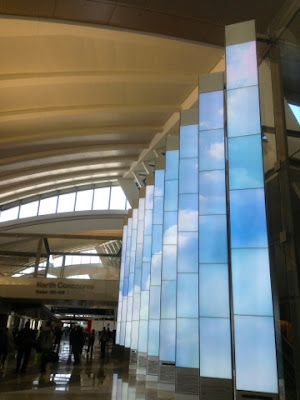 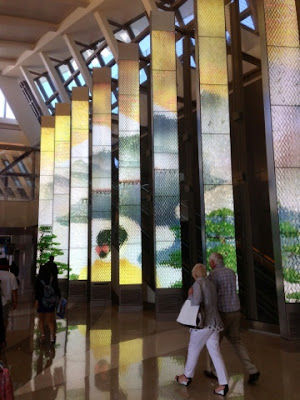 ...to subtle retail imagery inspiring you to shop in the not-yet-open boutiques... 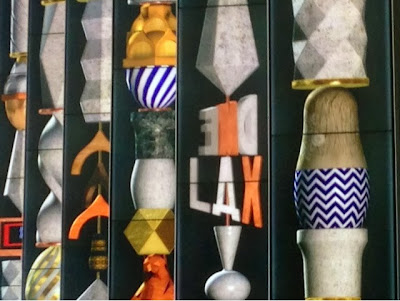 ...all with gentle sounds elements wrapping you in the experience as you pass by.

I managed to post a couple of quick Instagrams featuring a few of the airport "Pups" - pets unstressing passengers - what a brilliant addition, well-played LAX! 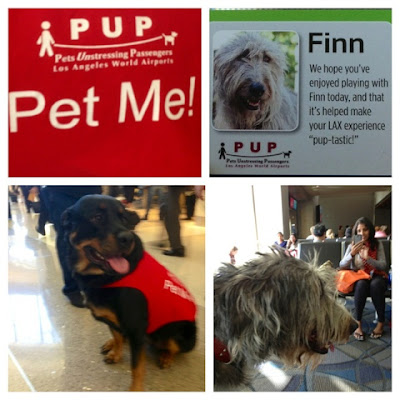 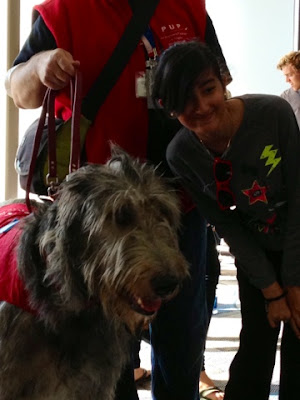 Then the time came to hang out at my gate for my Emirates flight. 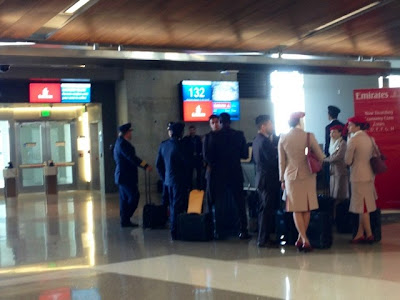 The seats in the gate area were all lovingly accented with plug outlets, another quietly unassuming welcome detail in the new terminal. 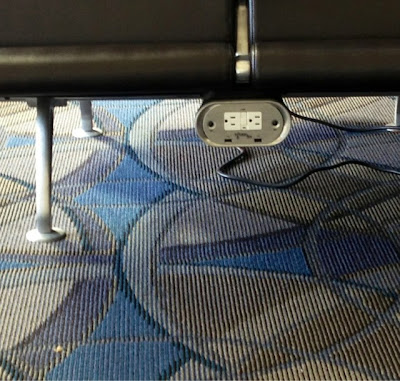 Alas, time came to board and I took one last look back down the row of empty retail space and wondered how different it will all look when I come back through here next month. One thing I will know for sure is that I definitely will have been here before. 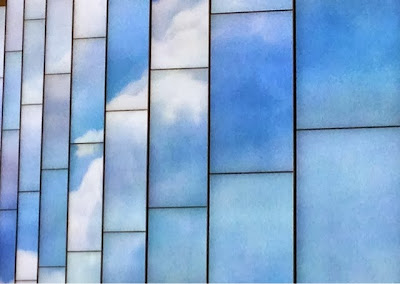 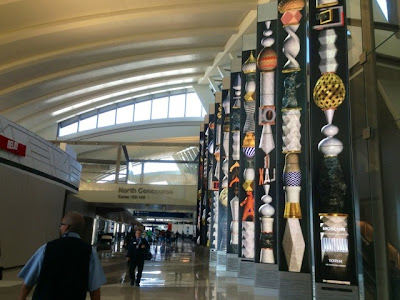 
Recently I had the immense pleasure of traveling to Nicaragua to experience the Chicabrava Surf Camp in San Juan del Sur. These instagrams highlight some of the super fun activities we managed in just a few short days - lots of incredible girl-powered surfing, some yoga, some sailing, and more: 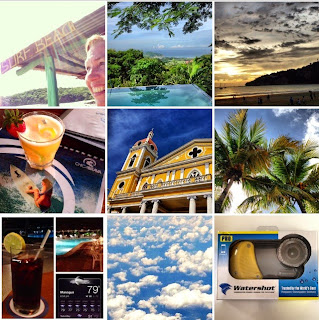 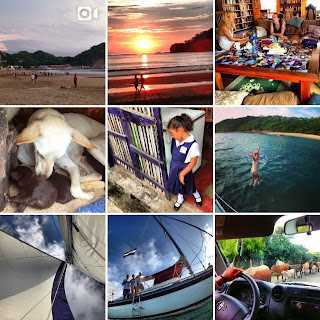 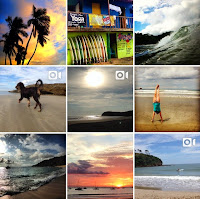 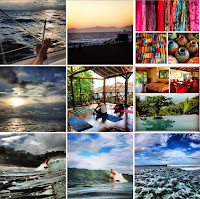 It was nothing short of a fantastic adventure, most of which was spent in or on the water. Because of that fact, I wanted options for capturing the experience without ruining my iphone or packing my DSLR water housing, which would take up too much space in the carry-on. Besides, I wanted to surf more than I wanted to worry about taking pictures. So I grabbed my GoPro Hero II,  which I've had for awhile, and picked up another new goodie, which I'll get to further on. First, the Go Pro saga.

Before leaving home, I plugged in the Go Pro to charge it up overnight, and when I got to Nicaragua and pulled it out, I realized I'd left the charging cord at home, and the camera was only charged to about 25%.  So basically, this meant one and only one surfboard-mounted video of my first wave on Day 1 at Playa Remanso:

But as you can see, I was able to get plenty out of the footage! Paddling, riding, some cool slo-mo clips, and a couple of stills. We'd been asked by Chicabrava to come up with a personal theme song for the week, and clearly,  the song "I Love It" by Icona Pop was meant for me. This video was edited quickly on mac with imovie, forgive the audio tracking mishap - just needed to get it posted for this blog. Anyhoo, that was it, that's all the GoPro footage I got before the battery went dead. So with no charging cord, I packed the GoPro away and, to be honest, felt a bit of relief as it freed me up to simply enjoy the rest of the day surfing. Which I did. Totally.

The next day, we headed to Playa Hermosa, a gorgeous sprawling beach where they dropped the competitors for the "Survivor Nicaragua" season.  In a smart move, Chicabrava actually purchased the two vehicles from Survivior after filming, added board racks and a paint makeover, and now they serve perfectly to transport a bunch of chicas heading out on a Nicaragua surf safari. Here's the wide open endless beach of Playa Hermosa:

For this session, Chicabrava provided a land-based surf photographer, Nicaraguan local Jerson Barboza. He provided me (and the other chicas) with a CD of some awesome stills he captured:

I was having such a great time surfing, I hadn't bothered to break out my new toy tool just yet - the Watershot Pro housing kit for iphone5, from a cool company making them right here in my home city, San Diego. This is the unassuming packaging it wears....


And this is a better look at what's inside: the case, a leash, and TWO interchangable lenses! Only the PRO version comes with both lenses, and it's definately worth the splurge to have them. 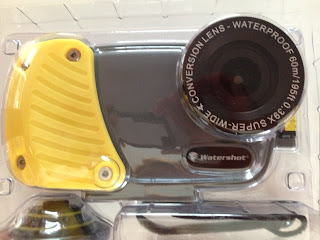 I have to admit, I was so smitten the moment I viewed a shot through the super-wide conversion lens (shown), that I never actually tried the other lens - a flat port which sees what your iphone normally sees.


I took a few trial shots at the beach, then took it on the afternoon's sailing adventure, and was pretty stoked with the wide-angle shots!(see instagram shots above)

Then I swam to the beach, iphone (in housing) safely strapped to my wrist, and took these: 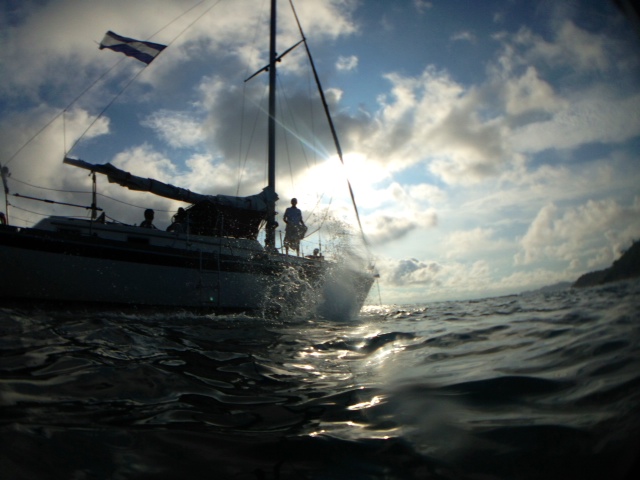 And from the beach:

Yep, I was in love with my watershot, and bravely decided to start sharing the shots straight to social media right there from the beach! How? Watershot comes with it's own Watershot App, (free download from itunes).  It's real easy to learn the simple menu functions (I taught myself on the plane with phone out of the case). One of those functions allows you to share your shot to facebook or twitter, directly from within the app! Here's what that looks like: 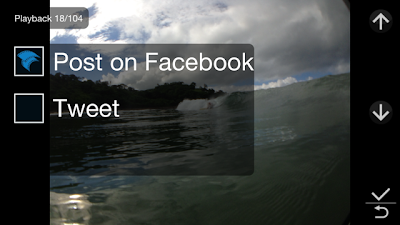 The only drawback of this function is that you can't add any text of your own, but hey, that's for later when you're out of the water, all surfed out, and happily reviewing your shots and videos. Did I say VIDEOS? Yes! That too is a simple one push menu function to toggle from still to video! Oh and that's not all, the app gives you various other customizable features:

* Camera Type: allows you to toggle from back to front camera - you know, for selfies in the water. 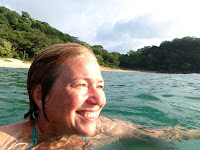 * Photo Options: allows you to choose single shot, or burst mode to freeze the action. 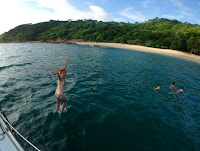 * Orientation: allows you to toggle from landscape to portrait, which comes in handy when composing your instagram videos.


Other great features in the app include a floating compass, and a self-timer release programmable up to 60 seconds. There's so much already that the Watershot app and housing can do, and it's only going to get better with updates and developing features including bluetooth enabling, a dive module, and a pistol grip....sigh,  I can't wait for Christmas....

Meanwhile, back in Nicaragua, on Day 3, I forsook a surf session to wander out in the waves and put my Watershot skills to the test. Using the 110 wide angle,  here's a tightly edited sampling of stills and video I managed:

Well, if nothing else, I learned I'm a better surfer than a surf photographer! I've only just begun, and will continue to experiment and master skills with my Watershot. But back on the beach, I did get my favorite footage of the morning shoot, so I"ll finish with this little #instavid....

"Dawn Patrol with the Surf Dawgz at Playa Maderas"

This post is part of Instagram Travel Thursday, where this week I've added my link to the collection hosted by Elena Sonnino of Live, Do, Grow. You can find more travel pictures on Instagram with a search of hashtag #IGTravelThursday.


Disclaimer: My Surf Camp trip to Nicaragua was hosted by Chicabrava, and the cool folks at Watershot provided me with the Watershot Pro housing kit. Opinions are my own, and if I didn't love it, I'd let you know it. I promise.