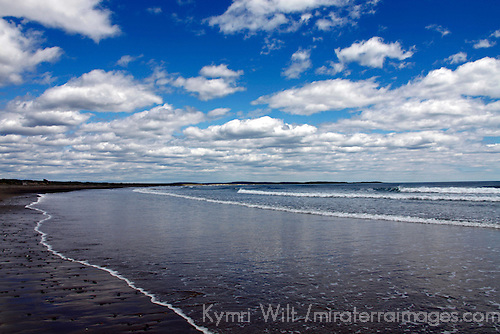 Right, so if you're looking at a map, I'm crossing a region of Nova Scotia, known as the Eastern Shore. I've fondly dubbed it the Road trip for Cameras.

To get across by car will take about 2 1/2 hours, and that's the express route, going straight through, mostly inland. What's the big hurry? The alternative is about 5 1/2 hours via Marine Drive, the coastal route. So why not make a day of it and go the scenic route? That's what I came here for anyway, the scenery. And I had a full day to enjoy it. Hurry? No, none whatsoever. At this time of year, the daylight stretches out long at both ends.

Certainly, this could be a nice 3-day trip in itself. But with one day, there's no need to rush through. You just have to pick and choose where to stop and explore. I made a point of doing very little reaserch before arriving - I like surprises and getting lost and not having any set agenda or expectation. There were only two must-see's I wanted to check out along the way: a surf spot, and a provincial park. Given plenty of options for both, I didn't put too much thought into deciding. I knew they'd all be good.

I like to seek out and photograph surfing spots wherever I travel, and the more remote, the better; even better when there are actually surfers in the water. Of course, the best is when I can get out and surf too.

I picked a surf beach which had a pretty name: Martinique Beach. It also happens to be a Provincial Park, so I get to check off both. Located 8 miles off the main Marine Drive, it's one way in and out down a long finger of land and then along a one way spit of beach. This, I would go out of the way for. It's surf, after all. 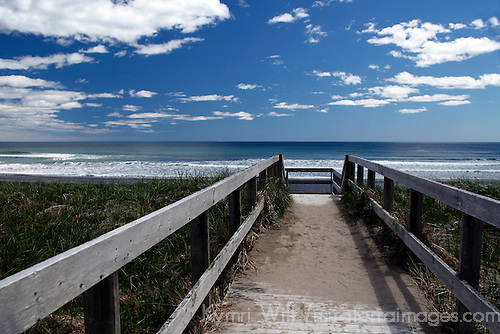 And it was worth it. The reward: A 3-mile long beautiful sandy beach lined with dune grass and covered by an umbrella of deep blue skies and puffy white clouds. At the near end was a protected nesting area for the piping plover, and the boardwalks continued on to open stretches of beach all the way down. 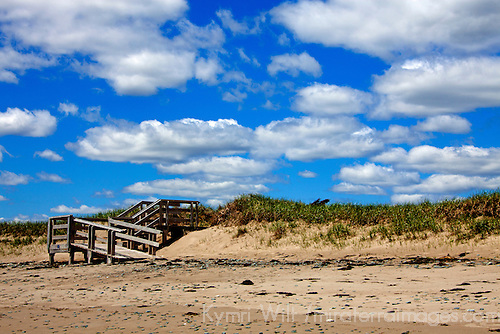 To find the surf, and the surfers, would require beachcombing, and that meant kicking off my shoes and plunging my bare feet into the soft wet sand dotted with dried kelp, round pebbles, and patches of sharper rocks. 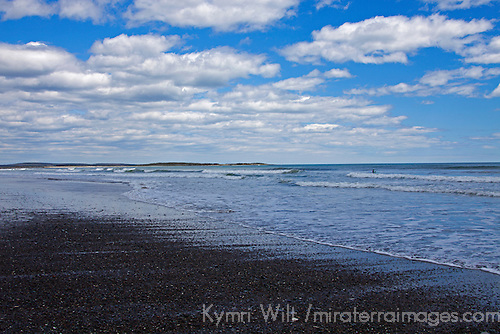 It all felt good on my feet. I headed right towards the water's edge to test the temperature. It was COLD! Like, foot-numbing cold. Wow. I documented it in case I would forever lose any use of my right foot (I didn't). 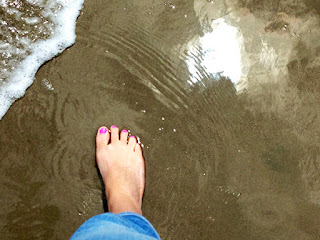 I squinted my eyes toward the east. I noticed small black specks in the water. If they were sea birds, I wanted to see them. If they were surfers, they were frickin' crazy to be out in that cold water so either way I HAD to go see for myself.

While there wasn't much of a swell, lo and behold, there were surfers braving the chilly waters for short, small waves. Die-hards. 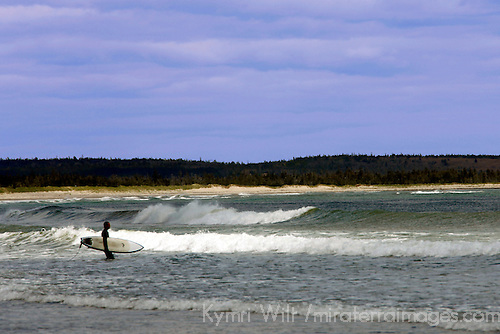 All the power to them. As for me? No, thank you. I'll stick to taking pictures this time. 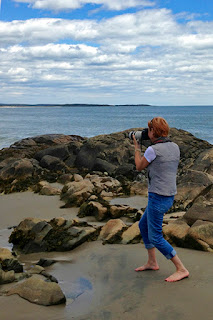 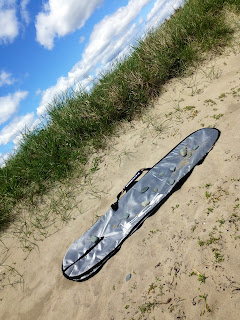 Now that I had both must's checked off already, I could leave the rest of the drive, and the day, to spontaneous temptations and recommendations of my local host and driver, John. John had driven all the way out from the Authentic Seacoast to pick me up. He admitted he hadn't taken the Marine Drive for a few years, so he was enjoying the route as much as I was. Plus, he had a lot of patience, an important trait when escorting a photographer through the land of natural scenic beauty. 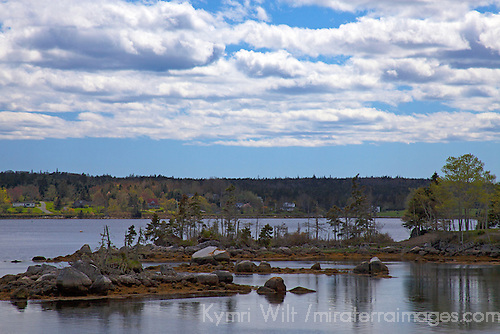 "Anywhere you want to stop for a picture, just say." He wasn't kidding. Stop we did. Right on the road. "Take your time," he assured me. Yeah, right. I was certain that every time we slowed down to pull over, some car or truck would come barrelling down on us. I fumbled and snapped and rolled the window back up in seconds, assuming a long line of cars would start honking behind us any minute. Well, that never happened. In fact, when it did, it was more likely they were stopping to roll down their windows and have a conversation. Yep, right there on the road. So, it took a few efforts before I ceased panicking and started to trust the pace of life in Nova Scotia.

Our next roadside adventure almost didn't happen at all, and John is to credit for turning the car around and retracing our way back to this sign: 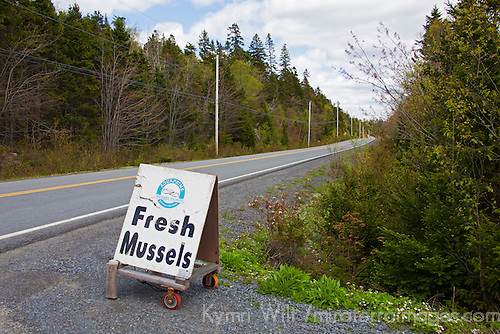 "When they have the sign out, you don't pass it up."

We pulled in to the gravel drive of Aquaprime Mussel Ranch, where we were invited to poke around the processing room. Here's a fresh bunch of mussels getting a a cold shower:


Then we were shown to the refrigerated room to pick our own bunch. 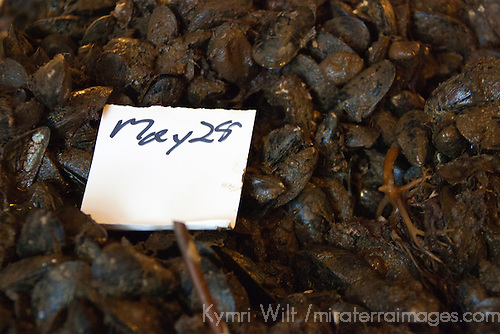 We were given ice to pack them in for the rest of our drive. Fast forward two days, and they re-appeared (and disappeared again) served up in this glorious manner at a very glorious manor, the DesBarres Manor Inn, in Guysborough. 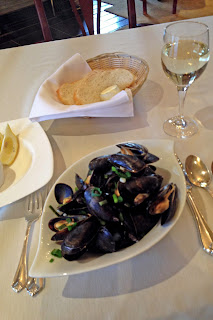 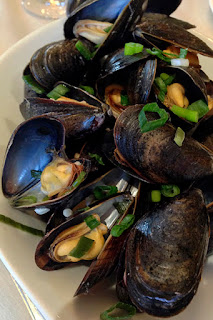 You might think you've had good mussels, but unless you've had these fresh out of the cold waters of Nova Scotia, and prepared exquisitely at DesBarres Manor, you simply haven't had the best.

So seeing how that warranted turning the car around, from that point on, I wasn't afraid to say "stop, slow down, go back" whenever my eyes saw the potential of something interesting. I took a look at my phone's map app to follow our route. I located the blue dot and saw that, not too far ahead, was another provincial park, and we decided to check it out. A boardwalk led from the parking lot through tall green trees and on to a sprawling white sandy beach. This was Taylor Head Provincial Park, with just the right amount of sunshine and wind to make for fun kite flying conditions. 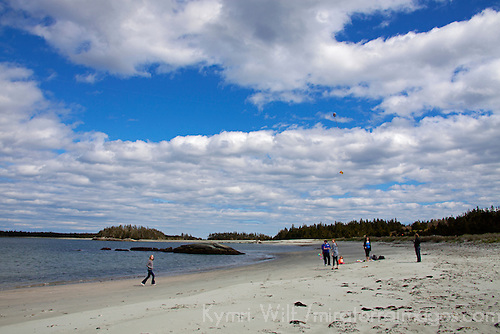 We continued on, seemingly taking turns saying "stop." My next request was to pull off so I could photograph the boats at Sheet Harbour, both in the water, and out. 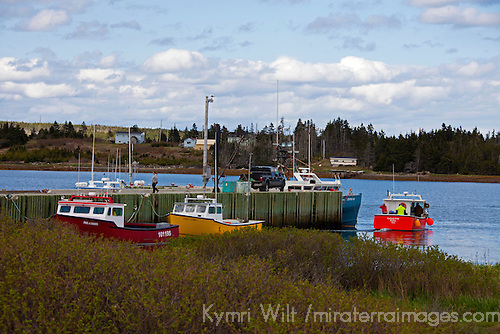 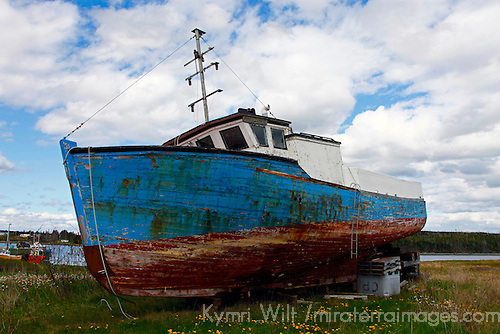 Then John decided it was time for some tea, so we stopped at Liscombe Lodge to enjoy a cup with a view of the Liscombe River and birdfeeders which attracted all colors of songbirds. 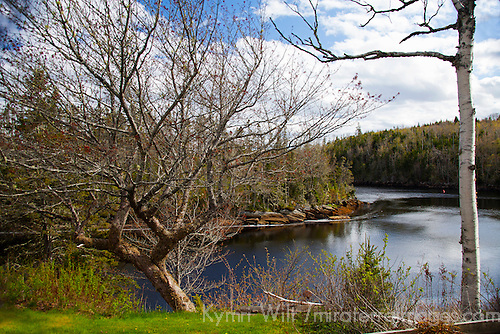 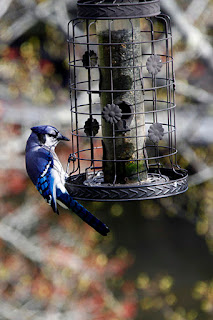 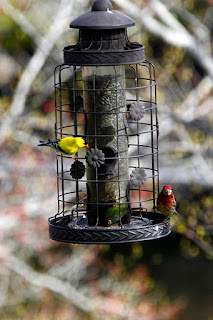 Then we made one last detour before we headed inland towards Guysborough; again, John's excellent recommendation - a drive down the Main Street of Sherbrooke Village. 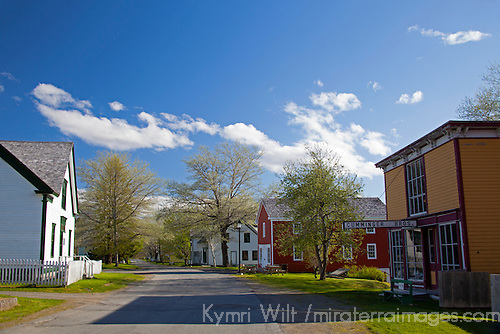 This small quaint town is a seasonal open air museum of historic buildings, providing lots of colorful treats for the camera. 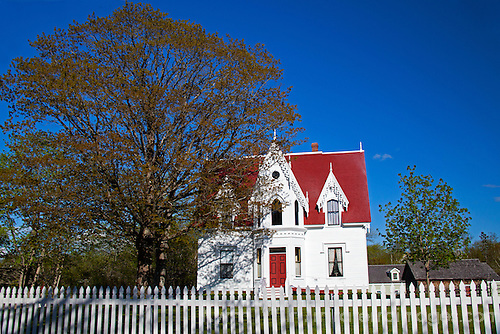 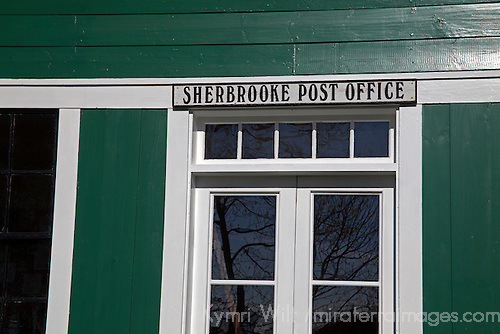 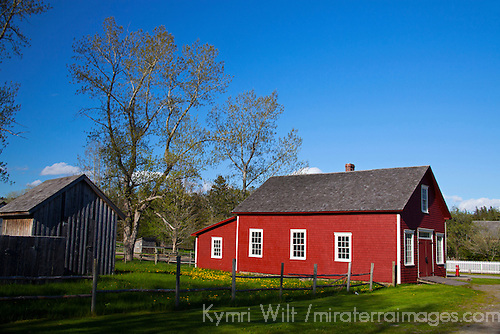 At last, we arrived in Guysborough, as the slowly setting sun sent magical golden rays of light. My eyes adjusted to a whole new spectrum of green, and I took in this view as a final desert course topping of a delicious meal of a day - along the Eastern Shore of Nova Scotia. 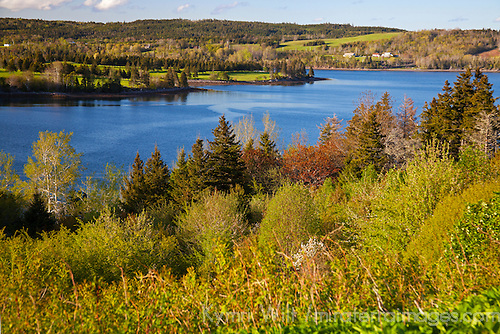 More inspiration for travel to Canada:
What the Halifax is a Moosehead?
My Top 5 Highlights of Travel in Canada
How Cool is Ucluelet?
Canada's Labour Day in Toronto

Disclosure: My visit to Nova Scotia was hosted by John and the welcoming folks of Authentic Seacoast Resorts.