Niagara Falls - Getting It All Wrong...and Being Allright 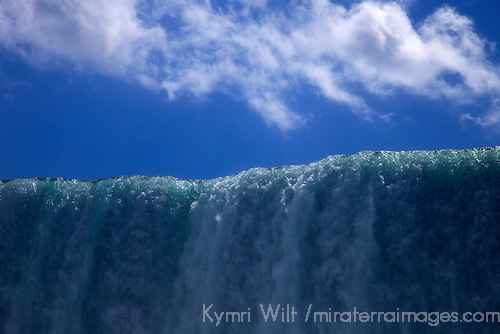 Sometimes, I get it all wrong.

Sometimes, opportunities present themselves for which I hesitate, or consider passing on altogether. That’s because I’m an idiot. That’s because I think I know exactly what’s coming, and I prepare to be underwhelmed. Sometimes, being such an idiot is the best way to be, because it is in those experiences that the lessons, and rewards, are greatest.

When I found myself at the end of an intense conference weekend in Toronto, I was beat, burnt out, and sick and tired of staring at a schedule and trying to be everywhere at once. I was also feeling utterly insignificant, like there wasn’t anything more I could do that would possibly be worthwhile, and who would care anyway. I just wanted to crawl into bed, sleep in late, and lazily idle away the next day. In my hour of under-slept and overwrought hesitance, I turned to you, my online travel community, and asked the question… ”Should I?”

And you answered, “YES.”

Thank you. I am deeply grateful to you for circumventing my being a full-blown idiot.

I WAS SO WRONG ABOUT NIAGARA FALLS.

I admit I’ve been spoiled with extensive travels to exotic places on this planet. Those “once in a lifetime” travel destinations for others have been “many in a lifetime” for me. I’ve been to Iguacu Falls. More than once. Both sides. I’d seen Victoria Falls, the Smoke that Thunders. I’ve hiked around, floated beneath, and flown above both of these amazing waterfalls. I’ve experienced enough magical mist and rainbows to raise some unicorns. How yet another waterfall could possibly impress me, I hadn't a clue. 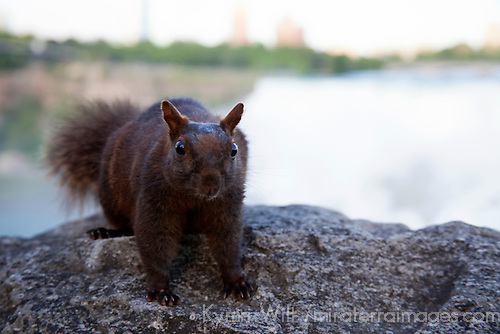 Well, I was about to find out. Sometimes, everything lines up to put me and my camera exactly where we were meant to be, even if only for one day - one magical, misty-rainbowed-filled day that would set me straight again and forever shatter my filtered lens of pre-conception. That's exactly what happened, by the way, figuratively and...uh, literally.


Painful to look at that, I know. Well that's karma in action, and lesson learned. Fortunately, the shattered filter (not lens, thankfully) happened later in the day, and now that I've exposed my faults and all to you, let's get to the good stuff - the reward:

NIAGARA FALLS ARE THE MOST BEAUTIFUL, STUNNING, & IMPRESSIVE FALLS I'VE EVER SEEN.

Well, I only had a day...and I did not regret spending every moment of it experiencing Niagara Falls from the Canadian side. I had a Niagara Parks Adventure Pass and all manner of activities to choose from right there in Canada - there was more than enough to fill the day.

And what a beautiful sunny day it was. A perfect day for surfing. So I headed downriver to check out the surf. Waves, that is.  I'd heard the largest series of standing waves in North America are found here, along the White Water Walk, and I surfed them with my eyes...and my camera!

Awesomeness, right? These waves happen downstream of where the river abruptly changes direction and forms a natural whirlpool, which is better appreciated from above in the Whirlpool Aero Car. Speaking of above, I really love the aerial perspective of, well, anywhere on our planet. So, of course, being a photographer, I just had to get up in the air at Niagara Falls too. 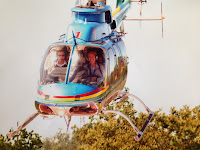 My flight over the falls with Niagara Helicopters was truly amazing - a quick 12 minutes total, fully narrated, but still long enough to get some great shots, and more importantly, perspective. 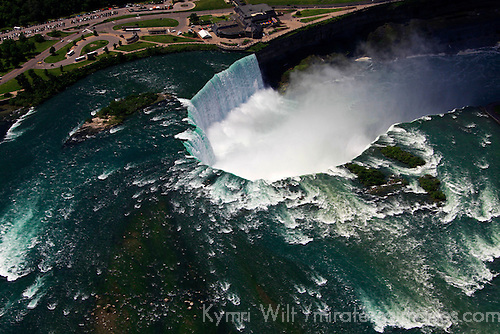 Perspective. A 12-minute flight experience can pass in a instant but last a lifetime, think about that.... 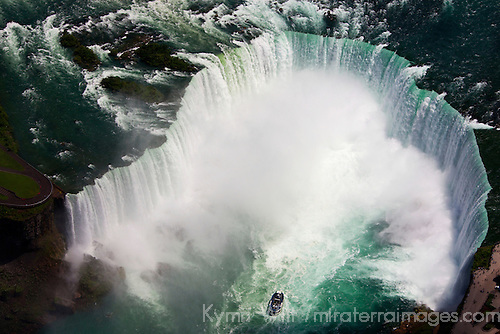 After my flight, I took in some history. The Maid of the Mist is North America's oldest tourist attraction, operating since 1846! 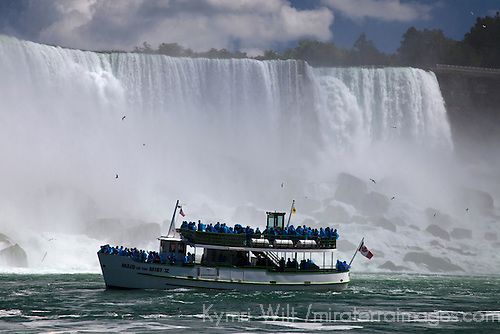 It was an equally invigorating adventure to see the falls from the water below as it was from the air above. In fact, more so, because from below, more of the senses are involved. You get WET. And it's really really really fun getting wet!! 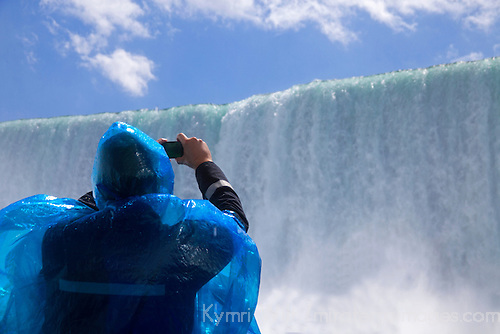 When I get wet, I get hungry. And thirsty. The Edgewaters Restaurant is perfectly situated with a view of the Falls, which made it a great choice for lunch. But it was the best choice for another reason. My phone battery was at 10%, and I needed to recharge as I still had half the day ahead of me. Upon inquiring with the hostess, I was seated at one of many tables on the terrace overlooking the Falls...with a plug outlet! So I was able to recharge both my phone, and my tastebuds, all the while gazing at the magnificent falls. The server offered a flight of Ontario micro-brews, and being that I am a self-proclaimed "drinkie" (as opposed to "foodie"), I had to try them all. Excellent, as was the satisfying meal. I enjoyed my "downtime" and battery charge up time tremendously. 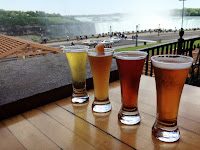 At long last, the sun was getting closer to where I wanted it to be for my "trophy shots". I'd anticipated all day when and where the sun would be setting, and was ready to poise myself and my camera for optimal light and rainbows. Well guess what, sorry to break it to some of those American Niagara enthusiasts who insist the US side is the best, but for photographers, the very best spot for rainbow-laden postcard pictures of Niagara Falls is definitely on the Canadian side, right where I was! 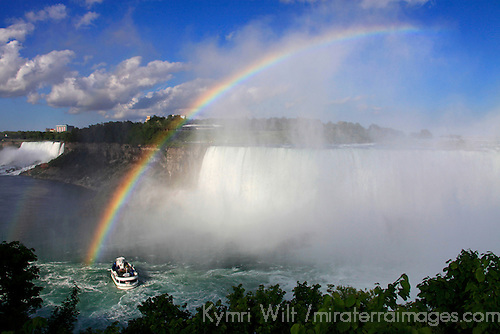 This, of course, is when I dropped and shattered my polarized lens filter which makes the sky bluer and rainbows "pop". So, I had to make do without. I soon got over it, especially after bumping into another blogger/friend who regretted not having her "big girl camera" with her at all! But we both agreed - shattered filter, iphone, or no camera at all, Niagara Falls was definitely worth a day trip from Toronto.    During my last hour at the Falls, I stood in awe and just gazed with my eyes and heart. I wanted to soak it all in - the moment, the experience, the smell, the feel, the sound....the grand show of mother nature that is Niagara Falls. I'm glad I was wrong. It's not about comparisons, it's not about cameras. It's about being completely humbled by something so much greater than ourselves. And in those humbled moments, everything...EVERYTHING....is allright. 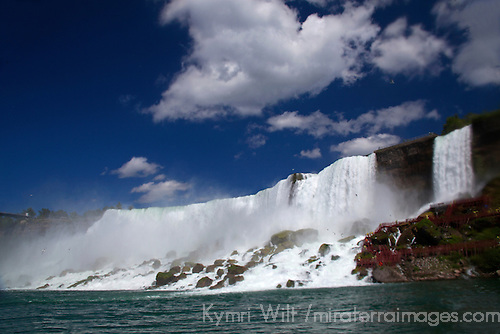 Disclosure: My activities at Niagara Falls were made possible by Niagara Parks who provided me with an Adventure Pass and tickets to all activities. My helicopter flight over the Falls was provided by Niagara Helicopters. My decision to visit Niagara Falls was heavily swayed by my facebook community, to whom I am extremely grateful!
Posted by Kymri Wilt at 10:19 PM