Melancholy wins. The sky is gray and light is dull. I had planned this day for taking pictures and posting an exciting blog; but find my efforts stifled by a wintry cold front….and I haven’t even stepped outside.

Last few trips to London over the years have been with family, and it’s been go go go. See this, do that, eat here, drink there, check in, check out, and cram as much into every day as possible. London is fun, right?

Now I’m back here on my own, with free time, and the only journey I want to take is inward. 25 years ago this was my playground. But it was also my home, and to be back here in winter brings back all the winter memories I had long forgotten. How cold it is, how gray it is, and how to make the best of a dreary day.

I had a student rail pass (in the days of BritRail), and when the rains came down, I would get on a train and just ride, anywhere. I’d carry only my journal and a camera, and sometimes I’d return with a few pages full, other times a few rolls full. But my journey would always take me somewhere, finding a new place I hadn’t yet discovered, a person I was meant to meet, a story waiting to be told. I'd return all the better and wiser for the experience.

Now I’m here and I’ve been gifted with an oyster card (London Transport), and it’s screaming at me to be let loose and go for a ride. All right, little tube/bus/train pass, you win. Euston – Watford. Slow train. In the rain. 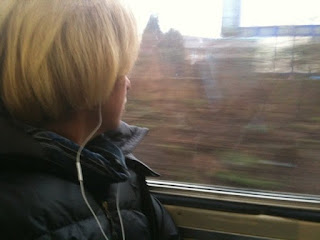 For a completely different take on London, read Summer in London.

(This post contributed to Photo Friday at Delicious Baby)
Posted by Kymri Wilt at 12:53 AM 4 comments:

There are few cities in the world that I love at first sight, often it takes a few days of finding my way around and getting a feel for things before I am entirely seduced. But once in a while, I am swept off my feet the moment I step out. And stepping out from the Ritz Hotel in Madrid was like my first kiss all over again. It simply took my breath away. Much like this Fresco at Palacio Real: 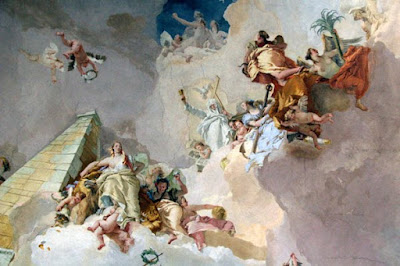 I thought I had seen plenty of Palaces, too many roman ruins, and enough Cathedrals to warrant me Catholic. I figured I had already admired a sufficient share of fountains and sculptures. I firmly held the belief that I wasn’t a big sports fan. And I was certain I’d had my fill of art museums. Madrid proved me wrong on all counts, and I experienced the pulse of the city right along with my own heartbeat....which was pounding.

I arrived in Madrid on a Sunday afternoon, and the first experience on the agenda was attending a real live futball game (soccer). Atletico Madrid vs. Mallorca. It was cold and rainy, but the crowds poured into the stadium and I was glad for the red & white scarf I had bought (team colors) and the seats sheltered from the elements. Well, most of the elements. The fans (and the Spaniards in general) love to smoke, even cigars, and there was a constant second-hand warmth to the cool air. Cough. I cheered like a native Madrilleno; I got angry at fouls like I knew what was going on; I booed when the Mallorca team would get the ball; and I laughed as I watched countless players from both sides take falls. Oh the passion!

There was a real art to it. No matter how light or heavy the contact (excuse for a fall), it would go something like this: the player would kick his feet up, spin about 1/3 way around in mid air, and land flat on his back (often after the action had moved elsewhere). After hitting the ground he does one of two things: he lays frozen on his back as if knocked out; or, he rolls over and brings a knee up to his chest, wreathing in pain. Sometimes he would bring both knees in and under himself and sit like a turtle in it’s shell. He doesn’t move. By this time the clock had been stopped and play halted. A team of medics comes running onto the field with cases, and sometimes a stretcher. Everyone watches intensely. A huge fuss is made over the downed player, and when sufficient attention has been attracted, the player calmly sits, then stands with the help of the medics, then takes a few steps and limps toward the sidelines.....then, suddenly, as if nothing ever happened, he turns around and runs right back out into the field without a hint of pain or injury. Silly game this. And they laugh at American footballers for all the protective gear they wear. At least they’re not falling down every time an opposing player brushes an arm hair.
We (Atletico Madrid) were the first to score, and it was awesome. (See, I’m talking like a true Madrilleno already) But the game ultimately ended in a tie, which was good for one reason: no excuse for the fans to storm the field. As the timer counted down to the minute, the “crowd control” appeared with all the anti-riot gear and lined the sidelines of the field, just in case. Of course, the game didn’t go without a small squabble amongst the players, and not without my camera tracking the action.

The next day was slated for the usual “highlights of the city” sightseeing. This was when Madrid charmed me at the other extreme. First, the pounding heartbeat of the fans in the stands enveloped me, now it was time for the alluring romance of the city to gently embrace me. And that it did. I’d already seen the Alhambra in Granada, and numerous palaces and Alcazars in Sevilla, Cordoba, and Toledo.

Still, Madrid’s own flavor of grand palaces easily wooed me into awe. 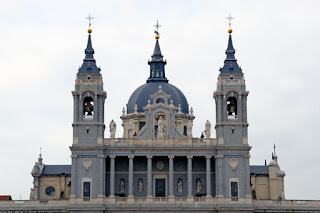 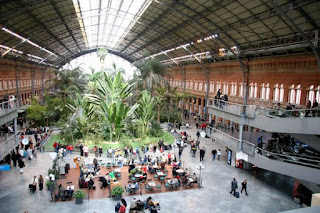 The afternoon unfolds slowly as siesta is honored and respected in this bustling capital. I wander into a locals Tapas place where there was no menu in english, and took a seat at the bar. I was already exhausted from the morning’s excursions, so I lingered over a café con leche to awaken my senses and take in my surroundings. Which, here again, meant second-hand smoke. But at the bar I could easily see the selection of tapas, so I ventured my way through the most appealing in appearance, and discovered tastes that matched. The tv in the corner of the room offered a bit something for everyone, sort of like entertainment tapas, and you could choose to watch what interested you. First was a news program of mostly international headlines. Then sports: highlights of last night’s futball game had everyone’s attention, and like a true local, I stopped eating to catch the play by plays. Ok, so I was really scanning the crowds to see if I could spot myself, but maybe everyone else was doing the same, who could tell anyway? Then after about an hour, I noticed a group of women enter the restaurant and stake out a table close to the tv. No sooner had they ordered, then a daytime soap began, and they all turned to watch as they enjoyed their meal, chatting during the commercial breaks.Around 5 or 5:30, the shops opened again, and I wandered myself into a sprint from store to store through the old city and ultimately to El Corte Ingles, the mega-department store. I have to admit that I haven’t had as much fun shopping since London in the early 80's.

I finally made my way back to the Ritz in time to prepare for a special evening out. We’d been invited to join a Spanish aristocrat for dinner at the Gran Club Pena, the oldest established private club in all of Spain. As it turns out, the club was to be closed that night (it was a holiday), but our host had arranged for it’s opening just for us, and we had the entire club to ourselves for the evening, with all the waitstaff and bartenders at our service. Our host was the owner of several Spanish wineries, and we tasted some amazing wines throughout the evening. I learned a whole new dimension to wine tasting, and enjoyed the sensory experience tremendously. The conversation was just as fantastic - politics, religion, the environment - all the usual topics to avoid over dinner were addressed and discussed head on in true diplomatic style. Spain has not had a perfect political history, but they have a great way of accepting it and owning it as part of who they are today, right or wrong, what happened happened, no denials whatsoever. Now that’s pure, refreshing, and admirable.

The next day in Madrid was highlighted by a guided tour of the Museo del Prado, and let me tell you, it was truly the best museum experience I have ever had, despite being utterly exhausted and already museum’d out (so I thought). I have only two words to describe the Prado visit with a private guide: Worth It.

The same may be said for the grand detour of flying to Bilbao just for the day to visit the Guggenheim, only it takes three words: Totally Worth It.

And here I didn’t think I was much of an art afficionado, but there is something so different about seeing a master’s work with one’s own eyes - and not in an Art History text book. Now I want to bring everyone I know back to the Prado and share all the insights they’d otherwise miss on their own. I also gained a newfound respect and admiration for painters.

Madrid captured my heart on many levels, AND has inspired me to write about it. That says a lot. Ole Madrid!

This article is one of many links to explore at Delicious Baby.
Posted by Kymri Wilt at 3:29 PM 3 comments: