Samantha Brown and Rick Steves: The Best in the Field

This past weekend I had the incredible opportunity to see, hear, and meet two of the best in the field of being "in the field" and hosting great travel shows, Samantha Brown and Rick Steves. They have the jobs we all dream of, right? They get to travel the world, followed around by a camera, and share their adventures, experiences, and travel tips with the rest of us. And we love them for it!
Well, I do anyway. Hosting a travel show is about the only thing still missing from my resume, and since I'm bound and determined to follow in the footsteps of Samantha Brown and Rick Steves, I had to find out what those footsteps entailed. Fortunately, both Samantha and Rick were happy to share at the LA Times Travel & Adventure Show last weekend.
Before you think I somehow got exclusive interviews with them, I didn't. They each spoke to packed conference hall rooms and I just happened to be one amongst the throngs that sat to listen. But I was busily taking notes. Their formats, and their backgrounds, were entirely opposite, and make for an interesting contrast and comparison.
Saturday was (unofficially) Samantha Brown Day. She was only there for part of Saturday, while Rick Steves was there both days, so trying to fit both in one day was more than my excited little heart could take, especially considering that Arther Frommer was also making appearances, along with Travel Writers, Editors, Operators, Suppliers, and many of the Who's Who of the Travel & Tourism Industry. I basically walked around in a semi-daze on Saturday, overwhelmed and overstimulated, and found great relief when it came time for Samantha Brown to talk. Then I could finally sit still and drink my coffee (which I didn't need!).
She appeared in a lovely turquoise sundress very well-suited for LA, and a nice compliment to the colors I was wearing, so already there was a kindred connection. 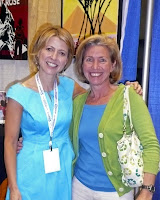