On the set with Phil Mickelson...and me 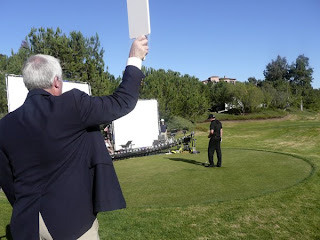 Have I ever mentioned that I love my jobs? In between travel assignments, I supplement my income with work in front of the camera. (Did I mention I love my agent too?) Sometimes, in a rare twist of fate, my two creative artistic pursuits merge and I get to work both sides of the camera all at once. Today was one of those days.
Call time to arrive on the set was 6:00 a.m. Not too bad, when you consider the set is a Golf Resort and it's a gorgeous balmy 76 degrees in Del Mar. The coffee sucked, but the blueberry pancakes and omelettes to order were the perfect compliment to the sun coming up on this setting: 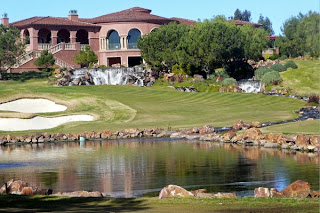 It's the set for a commercial, for a video game, and probably a hundred other uses hidden in the contract's fine print. When you consider they closed down the entire golf course and resort for the day, it's not a low-budget deal. When you consider the star of the commercial/videogame/montage is pro-golfer Phil Mickelson, well, it's likely a national deal. 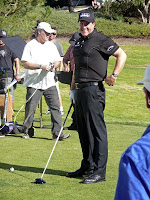 Then, when you see the cameras set up, well, you lose count of both lenses and dollars and don't even question the fine print. Here's what the 1st AD had to tell Phil about the shot being set up:

I mean, this is only about a third of the full set up rigged at the 9th Hole (which was really the 2nd hole, for all you golf enthusiasts playing "guess that course"): 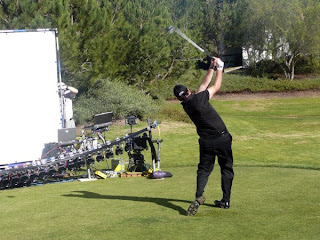 That was the money shot right there. That string of black things - those are all cameras. Yep, Phil's shoes get major screen time. Well, I had my own camera too, and within moments I was officially approved to take pictures. of Phil Mickelson. While they are taking footage of me. This shot was taken "live" while the camera behind Phil was rolling, some over the shoulder b-roll of him working the media. 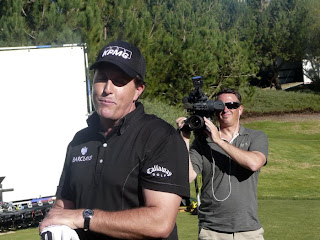 It's not all action on the set, especially when the set is a golf course. There was plenty of down time during which adjustments were made to cameras, robotics, and robotic cameras. As the afternoon wore on, Phil finally loosened up (where do they get these actors anyway?) and the crowd started getting punchy. The woman behind me kept frantically trying to get a shot of Phil with her cell phone - here I was quietly taping a break between takes, and this woman blurts out to get his attention and he thinks it's me. But oh, just look at that smile...

Since I was hired today to be on camera, not behind it, here's me in an earlier shot....trying to look like I know where the ball went. 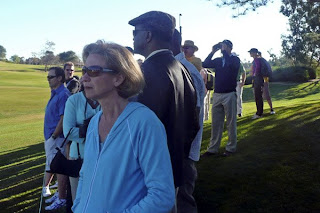