So the Chinese New Year is upon us, which gives me occasion to finally post articles and images from my travels to China this past October. (Yes, that's how busy I've been - or how behind I am depending on who is reading this - but I've got 6 weeks before my next trip and hope to catch up by then!).
Since Beijing was the first stop, I'll start with the Beijing Opera. Here is a peek backstage at a few performers preparing their make-up before the show:

Having seen the show several times over the past few years, I can attest to the fact that each year the performance is shorter and more acrobatic than the last. This is an obvious effort to hold the interest of the tourists who fill the theater and rely on overhead subtitles in English - make that Chinglish - to understand what's being said, or sung, or screached, or some strange combination of the three that results in a human voice producing the sound of bow being drawn heavily across a violin string. Here's a more tolerable sample:

I know, that's not so bad! Well imagine sitting through 3 hours of that. It takes an open-minded ear to appreciate. It's no wonder they adapted a condensed version of the Beijing Opera to appeal to wider audiences. Another adaptation was to incorporate more choreography and acrobatics, thus providing more stimulating visuals:

Just one more video from the Beijing Opera, I promise. It ties into the next subject of this blog, which is where do they find these people???
They start 'em young. In Shanghai, a visit to the Children's Palace reveals a daycare where children go to study the arts. Here is a 9-year-old Chinese boy demonstrating his grasp of opera....and swords:


So that someday he may take to the stage in this role:

And that's it from the Beijing Opera, trust me, it's enough. But before you think I'm recommending you skip the Beijing Opera when in Beijing, I'm not! It's a must. Whether you appreciate, enjoy and embrace this ancient Chinese art form, or simply snack on the complimentary nuts and sleep through most of it, I promise you this - you will never forget it, and you will find yourself talking about it for years to come.

So now we're in Shanghai at the Children's Palace. The kids are darn cute. There are classes going on for every aspect of traditional Chinese Arts.

We watched the boys learning to take tumbles. 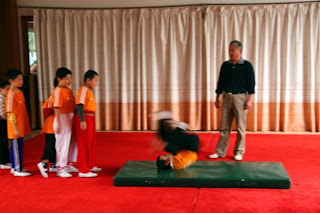 And we watched the girls learning not to:


I wonder if any of those little girls have the dream of growing up to join the Shanghai Acrobats? Well, by growing up, I mean maturing to the age of about 12 by the looks of these gymnasts:

The Shanghai Acrobat girls aren't limited to such feats of balance, for example, they get to have fun too. I mean, what isn't fun about hula hooping?


And when it comes to hoops, the men (or boys) are just as masterful.


The Shanghai Acrobats performance remains at the top of my list for best evening of entertainment anywhere. If you do nothing else in Shanghai, see this show!!!! (and the photo which leaps off the blog - that's no accident) 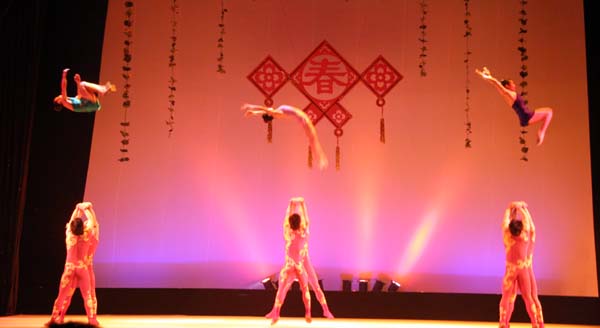 Enough excitement of the big cities? Shanghai, Beijing? Well, just about anywhere you go in China, don't be surprised to find the Chinese locals dancing in the streets at daybreak, like these folks in Xian, who find ballroom dance a great form of exercise.


If that's all too energetic for you, then head out into the country, away from the hustle and bustle, and you'll still find plenty of traditional performing artists and Chinese arts. Like this sampan boatman on the Daning River, singing traditional Chinese folk songs that have echoed through the river gorges of the Yangtze for as long as the river has been flowing.


Or head down to Kunming, in the Yunnan province, for a most authentic taste of traditional dancing. I'm told this gathering by an ethnic minority group visiting the Stone Forest was a rain dance. They don't do it for money or for show. They do it in celebration of nature.

It seems the Stone Forest is a popular place for musically inclined minority groups. Here's another beautifully costumed ethnic group posing for a photo with the instruments taking center stage. 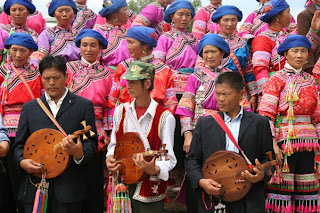 Kunming also hosts an absolutely amazing theatrical "Minority Show", and let me tell you, there is nothing else like it anywhere. The theater is bleak and humble in comparison to the venues of Shanghai and Beijing, but the performance tops them all. Confession time. No photos or video taping were permitted during the show. When the curtain rose and I noticed a few flashes here and there, I couldn't resist grabbing a shot myself (without flash, more subtle that way). However, the annoying lazer light beam held by an usher quickly found it's way to my vicinity, and the camera was put away. Mind you, I didn't miss it one bit as the show was simply amazing and I couldn't take my eyes off the stage the rest of the evening! Words can't describe it, and images wouldn't do it justice anyway. A video clip would hardly scratch the surface. But I have to post the one image I snapped. I just have to. This article needs a big finish! 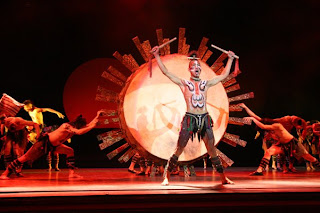