On Being Active, Surfing, and Advertising

A few weeks ago, a series of photos I took earned me a feature story in the Member Showcase blog at Digital Railroad. I caught the eye of Surfrider’s CEO Jim Moriarty, who requested permission to feature one of the photos in his blog Oceanswavesbeaches. And my surf model Kevin Six has also blogged about the shoot here. 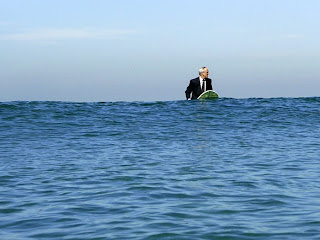 So I figure it’s high time I feature some of the images in my own blog and share a little back story on these surf shots.

It all began….well, I could go back to my childhood growing up in Coronado as the youngest sister of two big brothers who took up surfing before I was born, but that’s a whole ’nother article – no, book rather - waiting for me to write. Let’s just suffice to say that I find great inspiration in both of my brothers, and their life stories are as amazing as anything I could conjure up on my own. So Ben and Bob, once again, here’s to you – I love you and thank you for being who you are.
Back to the present backstory about the latest surf shoot and images…

It all began on February 6, 2008 when I attended an open hearing to support Surfrider to convince the California Coastal Commission to deny the 241 Foothill South Toll Road through San Onofre State Beach – a campaign commonly known as SAVE TRESTLES. Following thousands of pages of written comments and the 14 hour hearing attended by thousands, the Commission listened to reason and to the law by rejecting the toll road application. YAY! 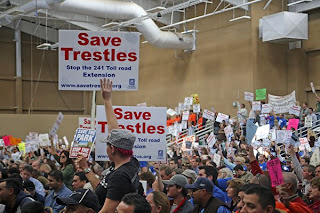 The thousands in attendance included CEOs, attorneys, commuters, moms with toddlers, activists, teachers, and all walks of business professionals, male and female, who took the day off work to give testimony or support. The definition of a stereotypical surfer was blown right out of the water. Surfers come in all ages, shapes and sizes. However, most of the signs, t-shirts, websites and promotional advertising seemed targeted to an outdated punkish youth subculture and did little to embrace today's real-life surfer - someone like myself (self-employed, wife, mother, homeowner, world traveler, photographer, hybrid-driver, vegetarian, etc.).

As a photographer, I wanted to capture the essence of today's surfer and environmentalist. I also wanted to explore a new way of conceptualizing what it means to be "green" - for an individual, for a business, and for the planet. I grabbed my surf buddy Kevin (a professional surf instructor/actor/model), and we brainstormed for all of two minutes then we were off. He had an expired laptop that he was keeping to someday artfully "smash into a gazillion pieces", but we decided that it would serve a greater purpose as a prop for our shoot (battery removed of course). We grabbed the laptop along with an old suit and some boards, and headed out into the surf, shooting all the way from the car right into the waves. It was pure, inspired, fun. The ideas just rolled out one after the next....Board Director, Green Executive, Rush Hour, Alternative Commute, 5:00, Boss's Day Off, Surfing the Web, Work Flow, Wet Suit, etc. etc. 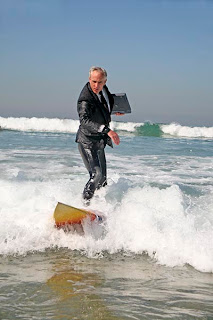 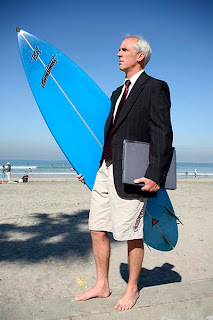 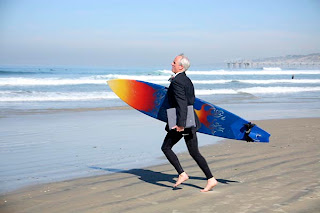 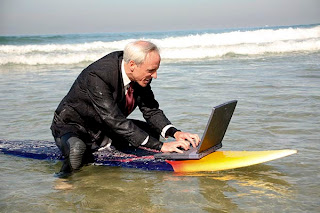 This is only the beginning of the conceptual wave….

To view the rest of the images from the shoot, check them out at Mira Terra Images. If you are interested in licensing any of the images, they are available for sale and publication. You can feel real good about it, because I am donating a portion of the proceeds from each sale of a surf-related image to the Surfrider Foundation.

There are so many small ways we can do something as an individual grass root to re-forest the whole world “green”. Ok, maybe that’s a stretch, but think about it. Be inspired. And be active! Whether you surf the waves or just the internet, do so with a conscience and live your life with passion. It’s contagious! 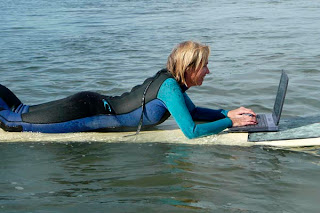 Posted live from Cardiff by the Sea, and that's me! (photo credit: Kevin Six)
Posted by Kymri Wilt at 3:56 PM No comments: