As a Travel Director, Travel Photographer, and well, all-around enthusiastic world traveler, I am often asked the same question:
“What is your favorite destination in the world?”
There is no right answer. The response must be qualified, such as: …For wildlife? Kenya. For relaxing? Greece. For photography? India. For visiting friends? UK. For shopping? For dining? Etc. etc.
Well, in the year 2000, I discovered what would be my best response if absolutely cornered, if I HAD to choose just one place. And for the past 7 years, my response has held strong. Peru.
Peru just has it all – it’s the one-stop shopping for travel experiences. The geographic diversity offers rainforests, coastal beaches, and snow-capped mountains each within an hour flight of the other. There are world-famous archeological ruins (Machu Picchu), incredible museums, and tons of treasures. There are indigenous people who speak their own ancient language. There’s culture - distinctive music, dance, and costume. There’s wildlife, and there’s urban modernity. There is great food and fantastic shopping. The people are friendly, proud, and colorful in clothing, conversation, and personality. It’s an ethnic potpourri. It’s a climatic potpourri. It’s a geographic potpourri. It’s a visual potpourri. And it’s a potpourri for all the other senses – sound, taste, scent, touch…and that undefined extra sense felt on a misty morning sunrise at Machu Picchu. All of the expected and natural, with a touch of the unexpected and supernatural.
Peru satisfies every type of traveler, from backpacking hikers on the Inca Trail, to 5-star luxury guests shopping for the finest gold, to those making a trip of a lifetime before it’s too late. No matter what one’s taste, intention, and level of comfort desired, a warm welcome can be found in Peru.
And now in pictures:

The remote jungles of the north, where the upper Amazon river hosts abundant wildlife and tiny villages complete with shamans (medicine men) who wear feathers and mix potions for every ailment known to man. 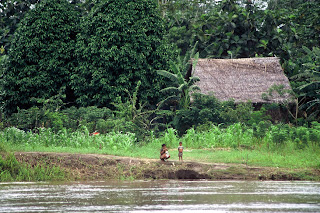 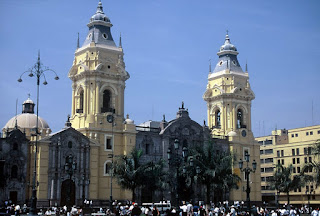 The Andes Mountain range forming the backbone of Peru. As impressive from the ground as from the air, and made ever more dramatic by the swirling clouds deciding which peak to present at which moment. 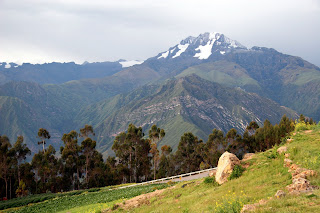 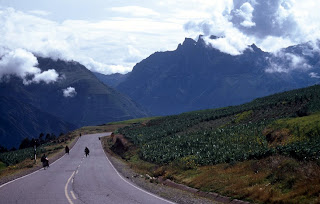 Hidden amongst the majestic Andes lies one of the greatest archeological discoveries of our time, the lost city of Machu Picchu. It is not just the remains of an ancient civilization. It is a sacred temple; it is a vital agricultural center; it is an urban complex with houses and town halls; it is an astronomical observatory; and above all, it is an enigma, ever shrouded by clouds and by mystery – offering not one but several possible explanations, and answers to questions that just lead to more questions. 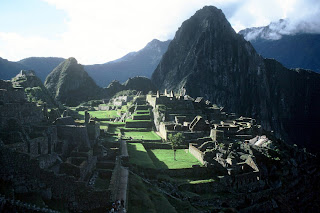 The people. While the ancient civilization that inhabited Machu Picchu has all but disappeared, Peru has no shortage of indigenous peoples. The most prominent of these are the Quechua, who retain their character, dress and language despite their enterprising exploitation of tourism. Or perhaps because of it. They do make for colorful portraits of a life and culture quite different from our own, even if they are posing and as soon as the camera clicks the hands come out. Nothing says Peru like colorful textiles and llamas. 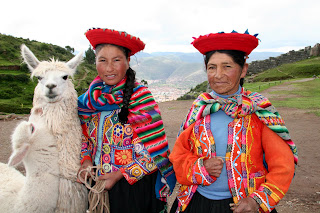 As for the rest - music, food, shopping, architecture - I could blog a thousand photos and write a million articles. But here are a few of my favorites to round out your visual experience, at least, of what I have fondly come to acknowledge as my favorite destination in the world. For now, anyway!

I don’t much blog about economics and free enterprise, but my latest visit to Peru compels me to share some observations. The Peruvians are perhaps the most enterprising people that I have ever encountered (and yes, I’ve been to China). There is no end to the ways they have developed to earn a living, and the ingenuity of the locals is truly admirable. Posing for pictures at touristed sites is one sure way they have discovered to feed the family. But their creativity goes well beyond such simple no-brainers. Give them a bus full of tourists and watch what happens.

In the city, at all hours of the day or night, you’ll see the “corner acrobats”. The light turns red and the bus is stopped in traffic. The show begins with a boy doing a simple cartwheel, then checking to see if anyone noticed. Chances are good that his eyes met with those of someone on the bus, so he continues, turning cartwheels alongside the bus. Soon another kid joins in to amuse the other side of the bus. They are quite agile and fit, not to mention daring, as they continue their show round the front of the bus when the light turns green, attempting to prevent the bus from moving forward until someone has thrown them some change. Window washers are there too. And vendors selling soda from styrofoam coolers strapped round their necks. But the kids have only themselves to offer. So they turn cartwheels and summersaults. It doesn’t always result in profit, but you have to admire their tenacity.

There are the enterprising “Rembrandts” and “Picassos” who surround the buses outside hotels with small paintings and cards to sell. They introduce themselves as “George Washington” to Americans and “Winston Churchill” to Britons, so that you’ll remember them “next time”, like when the bus gets back, and if you don’t remember them, no worries, they’ll remember you. You quickly learn not to politely brush them off with “next time” or “maybe later” or “mas tarde”, because they WILL hold you to it. There WILL be a next time.

Don’t assume that your chances to empty your pockets of local currency stop in the city. Oh no, save plenty of change for the road. Many buses pass through the scenic Andes outside Cusco, and the drive along the Urubamba Valley has become quite commercial in the past seven years….so something must be working. First, there is the obvious enterprise of setting out crafts and goods to sell at any and every scenic turnout. That’s pretty common everywhere. But in Peru, they have moved well beyond that to a more subtle approach. Driving along seemingly desolate stretches of road, we view them starting to appear out of nowhere…small colorful locals making their way across the fields toward the road as the bus winds its way to the point where the paths cross. In the road ahead, young girls begin to dance, attracting attention just enough to hint a reason to slow down. Older women drop their bundles to reveal souvenirs and crafts for sale. The littlest ones, barely just walking - never mind dancing, are none too young to get in on the action, and they’ve been stocked with little finger puppets and beaded necklaces to sell. Of course, the toddling children are irresistible to visitors, and I’ve no doubt they rake in more cash than any other family members. The bus rambles on, and the family clan returns to their staging area in the middle of the field….watching the road below for the next bus to come along so they can make their barefoot journey across the fields again.

But perhaps the most profitable enterprising antic, with the most predictable result, occurs during the shuttle bus return from Machu Picchu to the town below, Aguas Calientes, where the train awaits. As the shuttle leaves the site of Machu Picchu, a group of boys in costume wave and yell “gut baiiiiiiiiiiy” (goodbye) and “ahhhhhhh dee usssssssss” (adios) as the shuttle rounds the first of about 10 hairpin turns, weaving its way precariously down the cliff on a steep narrow dirt road. Every time the shuttle rounds a turn, there at the side of the road stands one of the boys, waving and yelling in his best English and Spanish. After about 3 turns we realize that it is the same boy each time, and that he is running ahead down a footpath as the shuttle creeps along the road. By the time the shuttle has wound its way down to the valley (25 minutes later) everyone on the bus is waving and cheering the athletic boy on. After the young athlete runs across the bridge on foot in front of the bus, the driver stops to let him on. One final wave and “gut baiiiiiiiiy”, then the pouch is passed and another family is fed for another week. You can’t help but overlook the child-labor issue and just appreciate the sheer exploitation of tourists taking place. Hey, it works!

So what becomes of the enterprising young generation of mountain runners and finger puppeteers? The athletic boys learn to play the panflute. As adults they will board the bus at Machu Picchu to entertain everyone with a short song (usually El Condor Pasa – made famous by Simon & Garfunkel). After applause, they present a CD for sale, and feed even more families for even longer weeks, while their sons continue to run the mountain path.

And the baby girls with finger puppets? They go on to be the beautiful young women dressed in colorful clothing and pretending to casually tend their llamas in truly spectacular settings. And when their youthful countenance has aged, they move on to selling goods at the markets and roadsides, and when their children have children, then they become the weavers, making blankets and clothes and dolls for their daughters and grand-daughters to sell.

Yes, exploiting tourism is a multi-generational trade in which every member of the family earns their share. Eventually some families make enough to buy a camera, and you’ll run into them at Machu Picchu and Sacsayhuaman, where they snap your picture amongst the ruins and hours later meet your bus back at the hotel with postcards which they’ve made featuring your picture. Who can resist their own image on a postcard?

It’s the element of surprise that cinches the deal for Peruvians. In Hong Kong, digital imaging gurus offer superimposed images of tourists overlooking the city on a “clear” day, advertising with posters and requiring full payment before the camera comes out. But Peru photographers sneak up on you, take the picture when you least expect it, and later present a fully finished postcard ready to go. Take it or leave it. Thanks to the element of surprise upon seeing one’s own image on the postcard, most people take it. The ones who rushed off the bus avoiding the postcard vendors later regretted brushing them off (“I thought they were just selling more postcards”). But not to worry, the vendors caught up with them once again at the airport for their “last chance”, and everyone goes home happy. No one leaves Peru complaining about not having any chance to get souvenirs, that’s for certain.
Posted by Kymri Wilt at 9:40 PM No comments: