So I showed up at the America’s Cup Harbor for my third day of work as a print model for the catalogues of two major high-end boat companies. I hopped on the permanently docked “kraft services” boat and had my wardrobe check, grabbed some water bottles, met my “boat husband” and yachting partner for the day, and stood by as the crew assembled their gear and gave everyone a rundown of the shoot. These were our instructions: “Go out in the harbor, enjoy your yacht, relax a little, watch the scenery, the cityscape, the sunset...and when we signal you, start running at full speed ahead and SMILE ...oh and just ignore the helicopter....”
Sounds simple enough. I mean, how can you go wrong, spending the afternoon on a brand new yacht cruising back and forth past San Diego’s skyline, who wouldn’t be smiling? Just another day of doing what I love and getting paid for it.
I’d worked modeling for this company twice already this month, on another boat, with a “build-a-family” composed of Boat Dad, Boat Mom (me), and a couple kids. The boat was the Bayliner Discovery 2007 model, and it is being marketed as a sort of nature adventure kind of vessel, one you’d anchor and go ashore for a hike or picnic. For that shoot we ran along Point Loma and watched for marine life - greeting the dozing sea lions bobbing on boueys, feeding the gulls and seabirds off the back of the boat, and watching the sunset beyond the lighthouse of Cabrillo National Monument. A tranquil family boating adventure with a focus on nature and marine life. It was intended to create the “cover shot”, but that’ll be up to the editor.
Much to my surprise I learn that today’s mission is also to nail the cover shot - for the brand new 3700 Maxum; lo and behold, I am again selected for placement on the featured yacht. My new boat husband, turns out, is a fellow native of Coronado, and we enjoyed reminiscing over our island history - he knew my notorious surfing brothers back in the day, went to middle school with my sister and her current boyfriend (another Coronado native), and knew exactly the house I grew up in. We passed our time exchanging names and memories back and forth and were lucky to hit it off so well. We native islanders are a rare breed, but I guess if we’re going to cross paths it’s no surprise it happened on a boat....in the harbor....just offshore Coronado.
Ok, back to the day’s mission. “Enjoy yourselves, have fun, smile, and don’t look at the helicopter.” There are plenty of helicopters flying around - thanks to the overbearing military presence that keeps San Diego off the real paradise list. Easy enough to ignore, as most San Diegans learn to do. So when the crew boat signals us to go, we were completely oblivious to the helicopter’s whereabouts and it didn’t matter, we just carried on enjoying the boat as directed, smiling, full speed ahead.
All of a sudden, a loud whirring shadow creeps up behind the boat and the adventure shifts into high gear. Suddenly I feel like I’m starring in a James Bond thriller - our luxurious yacht now being tailed by a helicopter whose reflection grows larger and larger in the sliding glass cabin door. The temptation to look back is overwhelming for us both, but we stop when our eyes meet and begin laughing in excitement, our heads turning only far enough to profile.
We continue on, no longer able to hear one another over the chopper’s noise, now with faces stuck in “perma-grin”. Just when we think the helicopter is backing up, off and away, down it drops like a spider hovering over the bow keeping perfect pace with the boat. Keep smiling. Don’t pay any notice to this huge machine creating a water dustbowl around the boat and the guy hanging out with a lens long enough to zoom in on my eyelash. HA.
Now I go from starring in my own personal action thriller to being the high-profile celebrity just trying to enjoy a day of yachting and being pestered by the paparrazzi. Flashes going off, lenses scoping out and in, and nowhere to hide as every boater on the harbor that day stares with dropped jaws. Several can’t resist and move in closer to see what famous celebrity we might be, snapping pics with their cellphones, and asking what film is being made, can they be in it, or perhaps if Pierce Brosnan or Tom Cruise are hiding onboard in the cabin below. So this is what a celebrity feels like. Fun for about....2 minutes.
We were alternating runs with another (smaller) yacht, so between takes we hung out onboard and the video crew boat circled us, taking more stills and tape. There was plenty of “down” time during which I took my own camera out to document the excitement and experiment with the given boats, models, and also to turn the camera back on the helicopter photographer! (Which is exactly what I’d do to the paparazzi, btw, be warned!). However this photographer was anything but annoying, a real nice guy in fact, and I’m sure he’ll appreciate the shots of him in action! He was awesome, juggling lenses and flashes and not dropping a single lenscap as he dangled from the open helicopter door. The fact that he was shooting with the latest Canon Digital gear (making my 20D feel like a point n shoot) only earned my further respect and appreciation. I can’t wait to see his work, meanwhile, here’s some of my own: 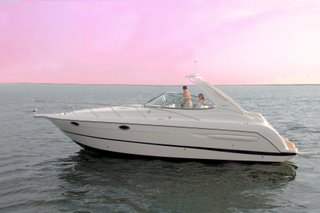 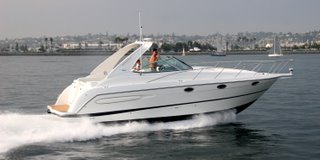 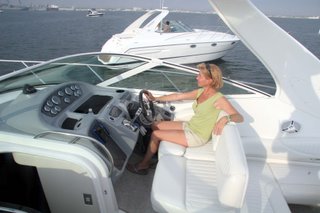 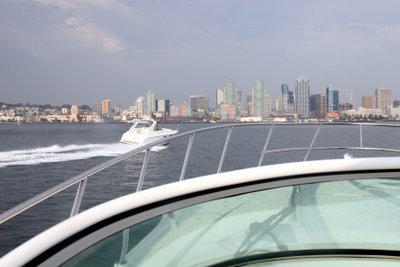 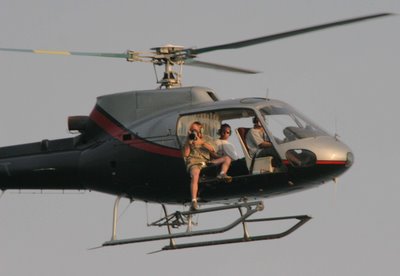 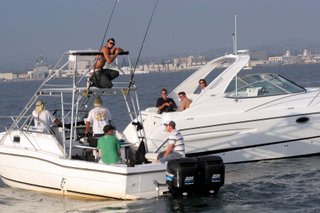 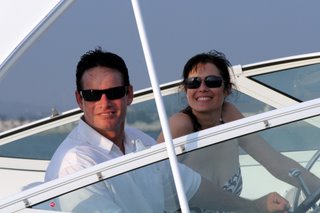 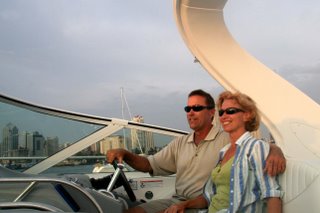 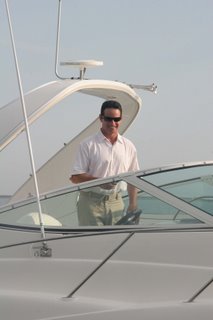 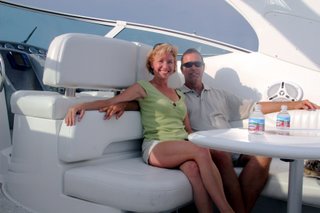