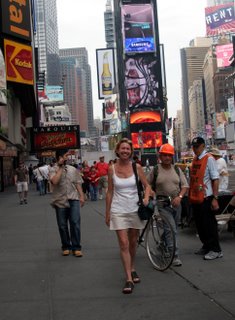 Ok, my last post was from behind the camera in NYC, now today I earned my way to the front. Here I am in Times Square, and lo and behold, here's the camera crew - 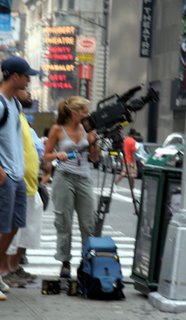 I've no idea what I appeared in this time, but no doubt someone somewhere will pick me out of the crowd....or tell me they've seen me somewhere.....just as a Broadway producer did tonight. Really, it's true. But I'll get to that in another New York minute.
Tonight was the whole reason I came to NYC in the first place. To act. Cameras aside, I took to the stage (my first NY theatre credit) and performed in a "cold" staged reading at Abingdon Theater on W. 36th Street. That's right baby, straight to off-Broadway, why hassle with the long lines of fans clammering down 42nd street when they can just see me in a nice little theatre space around the corner? And intimate it was. Yep, the backstage dressing room was shared with Fred Willard (Best In Show, etc.)who was performing a one-night benefit in the "other" stage (ok, he got the main stage). But I was thrilled to be there, and here's a picture of us on our little stage being introduced by the only living three-time Tony award winner, Hinton Battle. He was way cool. 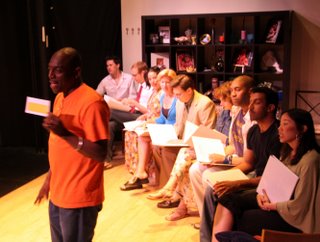 The cast was excellent I must say, all working equity actors who sacrificed their Monday night off to do this. And then me. OK, so it wasn't exactly my one night off from a long run on Broadway, but I held my own. I mean, none of them are performing in 3 different cities in one week, which is what I am doing. I debuted in a sketch comedy ensemble show in San Diego on Friday, flew out to NYC Saturday to perform in the reading tonight, then I'm flying back to L.A. for another performance Tuesday night. 3 cities, 3 dates, AND 3 different roles. And all the while, camera at hand, bringing you the world through my eyes!
Posted by Kymri Wilt at 10:34 PM