Xian 5/01/06
How timely that the Terra Cotta Warriors were discovered four years before China opened up to the west, and how lucky for the rest of the world. Xian is a smaller city of only about 7 million (cough cough), and is developing and growing and constructing and building as rapidly and progressively as Beijing, though it has quite a different feel to it. Xian does have plenty of historical significance, situated in the heart of China, it shared claim as China’s capitol for several dynasties. But today, Xian is visited as a starting point to view the tombs and pits of the Terra Cotta Warriors, first discovered by farmers in the early 70's.

The pits of Terra Cotta Warriors are on scale with the Pyramids of Egypt, and we have only just begun to unearth and discover what’s here. In Pit #1, a little over 1,200 warriors have been pieced together (no, they were not found whole or intact- the one found in best condition was in 7 pieces, most over 200). There are about 6,000 warriors to go, just in the first pit. After 20 years of excavation they noticed that the paint was fading and peeling due to exposure to the air and light, so they stopped the project all together while a team of scientists are researching a way to preserve the paint. The three pits were in various stages of excavation when the project was halted, and while they tell us there is almost nothing to see in Pit #3, there is quite a bit, so it’s impressive to consider what still lies buried.

From the Terra Cotta Warriors we move forward in time to the present day, May 1st (May Day - a national holiday), 2006, to another site in Xian, Renman Square, to view the lesser known Tai Chi Warriors. These are the people of present day China, who gather in masses in the early mornings to practice Tai Chi in groups. There are groups for every level and pace. The masters group all wore blue over their plain clothes - other groups moved to music with colorful fans or red scarves or swords. I even observed an elderly man who practiced his Tai Chi while balancing a ball on a ping-pong paddle, defying gravity and tossing the ball up when need be then landing it perfectly upon his paddle with one graceful movement.

Talk about a relaxing and enjoyable way to exercise every morning - no gym membership required, anything may be worn, and anyone may join any group at any time. It was entrancing to watch, and challenging to photograph, but so worth the effort. 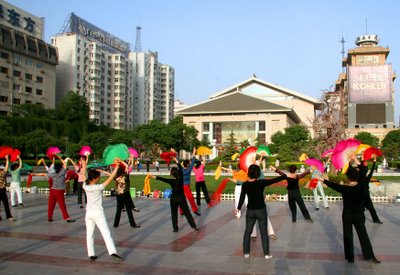