This place is like Disneyland - Tomorrowland meets NYC on a major growth spurt and flying fast forward into the future. Freeways stacked 4 levels high weaving between the skyscrapers, as traffic moves in every direction and every form underneath (trains, buses, taxis, boats, rickshaws, people movers, bicycles, monorails, a virtual real autopia and then some!). Each new skycraper outdoes the last in originality and design, and the lights at night put Vegas to shame.

On the facade of a 85 story building, a flare streaks up and bursts into fireworks at the top; on another, a HUGE 10 story tv screen (composed of individual lights) plays animated advertising and sports, and on yet another, a ribbon of red wraps around and around the building like a candy cane, then a blue ribbon, then a green ribbon. Where there is not a skyscraper, there is a construction site of huge cranes and workers busy building one 24/7.
As stunning as the city of Shanghai itself, the Chinese Acrobats performance is not to be missed. Like the skyscrapers on a human scale, they create well planned structures producing visual delights. Studly Chinese men in leotards bounce off teeter-totters and fly through hoops to the tune of Ricky Martin's "She Bangs", followed by a sensual tranquil balancing contortionist whose feats I couldn't even begin to describe. The aesthetics of the acrobats and the skyline of Shanghai are both representations of a culture deeply rooted in yin and yang, as history collides with the future in perfect harmony. 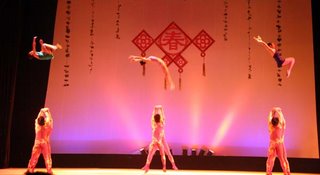 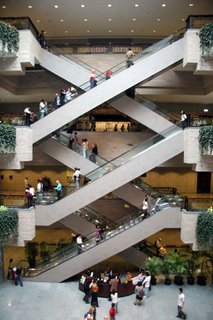 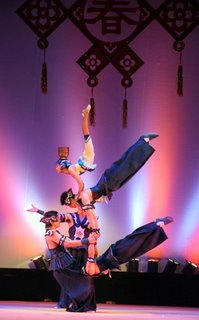 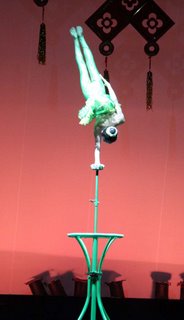 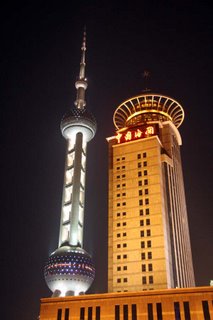