Today Peking was peeking out in full form. Even the sky showed up for a bit. But what seemed to be missing was...crowds! Alteast in the Forbidden City, talk about a rare photographic opportunity! Check me out, no one else!

Even this little guy standing in the alleyway made famous by "The Last Emperor", hardly a person in sight, makes the place feel so BIG!

As Beijing gets ready to host the Olympics in 2008, I already feel as if I am there. The spirit is alive and vibrant, and this city IS a grand glimpse into the future. 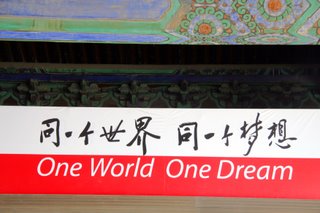 Be there dust or be there crowds, the world's eyes will be on this capital city, and it will be one heck of a wake up call!
Posted by Kymri Wilt at 6:48 AM No comments:

Beijing, China
As I left Chicago I took note of the weather forecast for Beijing: Just one word.. Not haze, clouds, or even smog....but smoke. SMOKE. Sure, the highs and lows were in expected range, but the use of the word smoke to describe the weather, well, this was a first. What would this mean? Perhaps it was a mistranslation - yes, I’ll assume the intended word was SMOG. And I’ll prepare my mind and my lungs accordingly.
As we began our descent into the capitol of the North, Beijing, I looked out the window to see very brown earth far below. A most uneventful brown, like flying over the mid-western US in winter. A flat brown land dotted with occasional settlements, farms, your standard rural landscape. But so brown. Nearing the city brought a change in view - more buildings, more trees, more roads, more activity. And, more brown. Ceaselessly brown. We descended into a thick brown haze. No, this was not smog, it was too uniformly brown. It was dust. The color of the landscape made no change from countryside to cityscape. It was all brown, as if someone had sifted fine cocoa powder over the entire region. There was probably some smog mixed in with the haze of dust, but overall, it appeared that man was not so much to blame as was mother nature.
A giant sandstorm had blown in from the Mongolian plains, and covered everything in a layer of fine dirt and dust. I just missed it by a few days. But the dust lay over everything, I mean everything. The buildings, the roads, the cars, the trees.....from above, all were brown. From the ground, the sky was brown. Still. It was surreal. My welcoming transfer driver tells me that this happens only once every two to three years, and I am just seeing the aftermath. I can’t imagine the worst of it, people can’t breath, people can’t see, and daily life continues through torturous winds of brown dust.
As we drive into the city, a light rain begins to dot the windshield. A welcome relief - only the second rain this spring, and nicely timed after the dust storm to help cleanse the air. The roads are lined with trees. Thick groves of trees, most of whose leaves are still dusty brown on one side while green underneath. I’m told the city has spent over 46 billion on greenery alone, getting itself all spruced up to host the 2008 Olympics. My guide is so excited. She tells me every Chinese person is excited to have the Olympics in Beijing. I’m excited for them too. So much construction, renewal, and, of course, greenery. But today, April 26, 2006, all I see is brownery. Olympics? An athlete is the last thing I’d want to be right now in Beijing. It will be interesting to see the end result of the massive transformation this city is undergoing. It is all happening right now. Somewhere. Behind the layer of brown. Ah, sweet. The cherry trees have just bloomed in the last day and the new pink flowers have managed to break through the brownery. Alas...even mother nature can’t stop herself!
Posted by Kymri Wilt at 8:00 AM No comments:

Coronado 4/14/06
OK, I couldn't resist the title. Here I go working both sides of the camera again - at the same time! The gig: A filmmaker is making a documentary. The subject: A young aspiring model/dancer pursuing a spot on the San Diego Chargers Cheeleading team. The segment: A photo shoot of fresh looks for her portfolio. The photographer: Me.
The location: I chose Coronado beach for all it offers - ocean (of course), white sandy beach, rocks, rolling dunes, palm trees....lots to shoot around other than the basic "bikini beach babe" standards. We had about a two-hour window of morning sun before the next storm was due to roll in off the pacific. The natural light was dramatic, the winds were blowing, and the effect of nature's elements were a perfect compliment to the stunning natural beauty of our young model.
I was so involved in my work as a photographer that I completely forgot about the film camera and crew following us around, documenting her every move...even as she comfortably and smoothly changed bikinis behind a towel the size used for dishes. The camera did a lot of over the shoulder filming from over my shoulder - and some of the stills I took will be worked into the film as well. Cool. When it airs I'll sit by the phone and wait for that call from the editor of Vogue, haha.

OK, now you've read through my little blog about the shoot, you deserve to see a picture. (And no, this is not just a ploy to get a thousand more hits on my blog site...but I wouldn't be surprised!)
Posted by Kymri Wilt at 8:44 PM No comments: