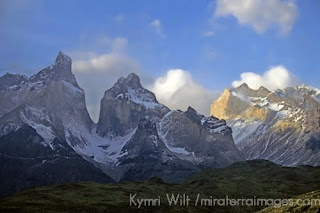 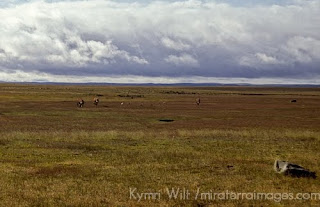 The road stretched out endlessly before us, and the windswept Patagonian plains pushed out in all directions. Behind us, the pointy crags of Torres del Paine were tucked into clouds and blanketed in dusk. Darkness crept slowly across the landscape.

I was nodding off to sleep on the bus after having had one too many days of hiking and camping, with thoughts of re-naming the range officially to "Toes of Pain". My feet ached, my toes were cold, and I was grateful to be seated up front near the warm engine box.

For reasons unknown, the bus came to a halt and the driver opened the door to the vast, dark emptiness. The winds howled and whistled right through the bus, causing most passengers to shift position and reach for another layer. The driver sat for a moment with his head down, then checked his mirror, closed the door, and began driving again. Civilization and the coast were still 4 hours away.

I was stirred awake by a loud belly laugh and a jab in my side. A spirit sat on the engine box facing me. He was thin and wore a black hat, and held a brown bottle of beer in his gesturing right hand. He was laughing and entertaining as if to a large audience, and I turned around to see that the entire bus was filled with spirits, occupying seats empty and full, and dangling from the overhead luggage racks. I braved a glance at the driver. He too was a spirit, with a soft round head and an eye that kept dropping from his face. The bus itself resembled a spirit in the form of a fat farmer in skinny overalls as it rolled along bumping over rocks and pits. Everyone was jovial, and there was singing while someone in the back was played a tingy sounding instrument. Many of the spirits were drinking or drunk. These were festive spirits.

But what were they doing on the bus?

Most spirits sweep across this land in a dance with the winds. The wind carries spirits from all over the earth, and they converge here, at the tip of South America, for their favorite activity...leaping off the continent to tumble across the seas. It seems that the very winds which blow across Patagonia are accountable to the passing of spirits as they race toward the continent's end and leap off into the sky.

I sat back and contemplated the spirits, gleaning in my new wisdom of the winds. I looked at the spirit on the engine box. He paused his celebratory antics and saw that I was ready for a story. He shut his eyes and began "it was a night just like this....." and softly spoke me back to sleep.

When I awoke, the bus was still bumping it's way through the black darkness, now with only one headlight. It sounded as if the other had rattled loose and was dragging along under the bus - reminding me of the one-eyed bus driver spirit of my dream.

Everyone else on the bus was asleep, except for the driver. I looked at him and smiled in relief that both of his eyes were still intact. Noticing I was awake and wanting to keep himself in such a state, he engaged me in conversation. After a while, I asked him why he had stopped earlier in the middle of nowhere. He paused a moment, and then spoke:

"My uncle was a bus driver. A few years ago on this road, he lost control and overturned his bus, killing everyone. Whenever I pass through the night on this road, I stop at the site of the crash and pick up the stranded spirits so they can complete their journey."

A small light flickered in the distance ahead. Then another. Then, light by light, the town of Puerto Natales took form, as the dawn began to spread through the darkness. We reached our destination.

The driver opened the door, and a few moments passed before anyone stood to exit the bus. I was first to do so. As I stepped down off the bus, I was teased by small gusts of wind. Each gust would embrace and surround me, then be gone as quickly as it came. I smiled, knowing the spirits were also arriving at their destination, and each gently bid me farewell before turning to leap off the continent.
Posted by Kymri Wilt at 10:37 AM